There’s a lot of confusion about the term “net-neutrality,” which leads consumers to believe that before 2015 it was difficult to have free and fair access to the internet. This is not the case. Were you able to access the internet before 2015? Could you access websites for free? The answer is most likely yes. FCC regulations were not needed then, and they aren’t needed now. But there are some big internet issues we need to solve.

Many of you have asked: Will ISPs (Internet Service Providers) now slow down my internet speed, and how can I know what ISPs are up to?

Here’s the answer: The FCC removed the prohibitions on “blocking” (preventing you from accessing certain website), “throttling” (slowing down your internet connection), and “paid prioritization” (potential agreements between ISPs and “edge providers” that would allow for higher priority access for certain companies).

However, if ISPs are going to engage in this activity, they must disclose – in a clear and transparent manner – what this entails so that consumers know what they are getting up front. While many are highly concerned about there being “fast and slow lanes” for the internet, there are numerous examples of how preferential treatment has actually benefitted consumers.

For example, Verizon allows their subscribers to stream NFL games on their mobile devices for free. The large amount of data that you use does not even count against your monthly data cap, because Verizon and the NFL entered into an agreement to offer this service. This is known as “zero rating” and it is very similar to the concept of paid prioritization.

The FCC, under President Obama, chose not to evaluate whether this practice was in violation of the spirit of their Title II Net Neutrality regulations because it was found to be so beneficial to consumers. All wireless carriers offer similar incentives for various high-bandwidth apps and sites.

Overall, we need billions of dollars in private investment to expand broadband to every American. Congress needs to do their job, codifying internet laws and applying light-touch regulations—then putting the regulations into statutes—so the laws governing the internet do not change from each administration.

Chairman Pai’s decision was the right decision, and now Congress must ensure every American has access to the best possible broadband service available.

Click here to watch my interview to find out why I supported Ajit Pai’s decision.

As many of you know, I am pro-life, and I fight each and every day for the pro-life agenda. I was absolutely sickened when I saw undercover videos of Planned Parenthood officials talking about the sale of fetal tissue and baby parts.

As the chair of the Select Investigative Panel on Infant Lives, I spent countless hours with panel members, investigating this abhorrent practice, and found many disturbing details about the abortion industry. It was my hope that our yearlong investigation, and what we found, would bring necessary changes within both the abortion and fetal tissue procurement industries.

This is why I was so happy to learn that two fetal tissue brokers in California were closed down last week by the Orange County District Attorney’s office for their illegal sale of stem cells and fetal tissue for profit. They must pay $7.8 million in a settlement, cease all business operations in California, donate their assets to a major U.S. medical school, and pay $195,000 in civil penalties.

This case will send a clear message to fetal tissue brokers that if they choose to engage in this illegal practice, there will be consequences. You can read the full news article here.

We have more good news. Congresswoman Vicky Hartzler (R-Missouri) and I wrote a letter to the Department of Justice, requesting an update on the status of various criminal referrals made by our panel. I received an answer from the Department of Justice: the FBI is reviewing what we found, and will review organizations like Planned Parenthood and others that allegedly engage in the sale of baby parts and fetal tissue. This practice is inconceivable and has no place in our society. The pro-life movement will win one step at a time.

This week, the Energy and Commerce Committee held a hearing to examine the drug supply chain. You likely know the roles your doctor, health insurance plan and pharmacy play in getting a prescription filled, but may not be truly aware of the complex journey medicine takes, beginning with research and ending when you stop by your local pharmacy to pick up your prescription.

We heard from 10 witnesses on how each piece of the chain—manufacturing, wholesale, distribution, payment—plays a part in getting treatments and cures to patients. I asked the panel what specific policy changes —either internally-driven or through changes in law—would bring down drug prices for consumers.

As one witness stated, “Bold steps are needed, at both the legislative and regulatory levels, to ensure that people have access to affordable medications.” I couldn’t agree more.

Getting Closer to Tax Relief

We are so close to getting tax reform across the finish line and to President Donald Trump’s desk. The Senate and the House conferees have been hard at work to ensure you get the best combined version of the two bills. The conference report is expected to be released soon, and I will review it closely to ensure hard-working Americans get long overdue tax relief. 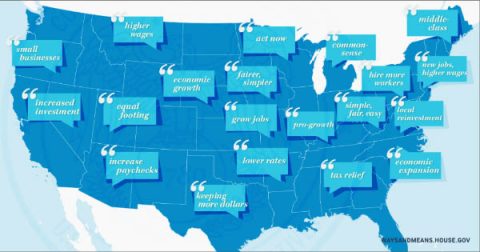