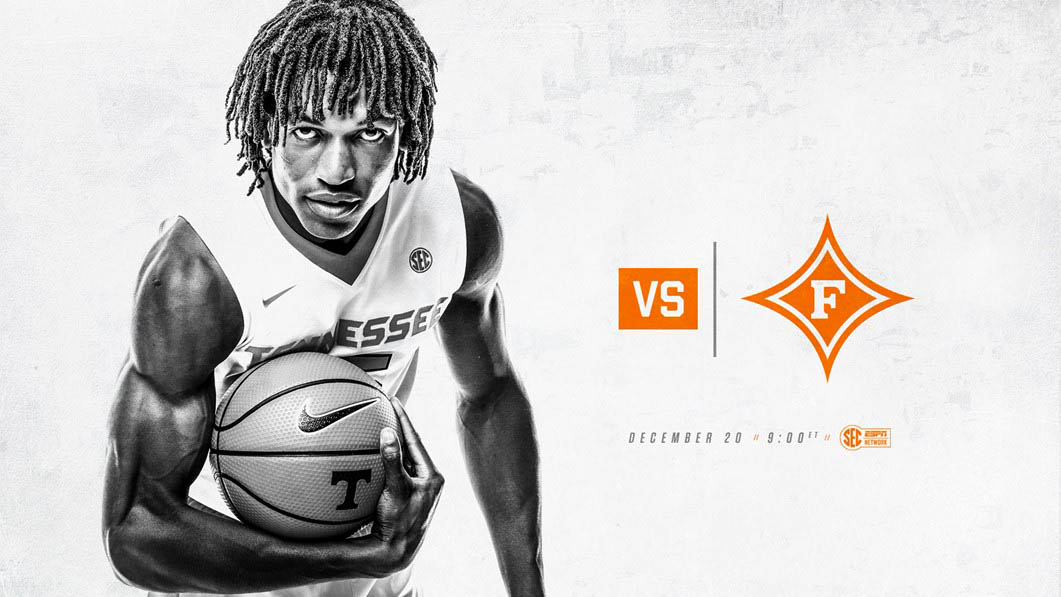 Knoxville, TN – Coming off their first home loss of the season, the 21st-ranked Volunteers will look to bounce back against a hot Furman team Wednesday night at Thompson-Boling Arena. The game will tip at 8:00pm CT and will be televised live on SEC Network and streamed online via WatchESPN.

Courtney Lyle (play-by-play) and Dane Bradshaw (analyst) are on the call for the matchup. Fans can also listen live on their local Vol Network affiliate to catch Bob Kesling and Bert Bertelkamp describing the action. Tickets are still available and can be purchased online through AllVols.com. 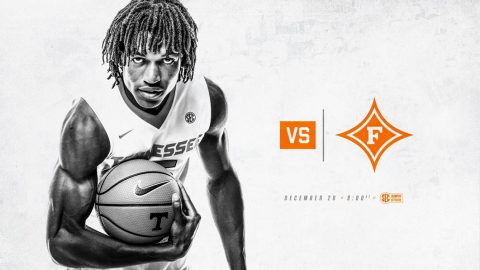 Tennessee (7-2) fell to No. 5 North Carolina on Sunday after holding a lead for the majority of the contest. The Vols will be tested in their next two matchups, facing teams in Furman and Wake Forest who are playing their best basketball of the season.

UT will look for forward Grant Williams, who is averaging 16.0 ppg and 6.9 rpg, to continue contributing down low and creating opportunities for the Volunteers’ SEC-leading sharpshooters from the perimeter. Jordan Bowden has connected on 60 percent (18-of-30) of his shots from behind the arc to pace the conference.

Another headline going into the game revolves around guard James Daniel III, the NCAA’s active career leading scorer. The senior is coming off a strong performance against the Tar Heels, accounting for a season-high 14 points after knocking down four treys. Wednesday’s contest will be Daniel’s 100th career game, and he only needs two points to break the 2,000-point mark for his career.

The Paladins (9-3) enter the contest riding a five-game winning streak and have won seven of their last eight after starting the season 2-2. Over the last four games, Furman has averaged 94.3 ppg. Furman is led by reigning SoCon Player of the Year Devin Sibley, a Knoxville native and Karns High School graduate, who is averaging 15.7 ppg on 49 percent (69-141) shooting to go along with 4.3 rpg and 2.7 apg.

After the matchup, the Vols will head to Winston-Salem, NC to face Wake Forest on Saturday before beginning conference play with a road trip to Arkansas the following weekend.

The Vols are rated No. 11 in the ESPN InsideRPI, with the nation’s seventh-rated SOS.

Tennessee’s two losses this season are to the last two national champions.

Per Ken Pomeroy, the Vols rank fourth in Division I with an assist rate of 68 percent.

Head coach Bob Richey is in his first season leading the Paladins, who are members of the Southern Conference, after spending the previous six years as an assistant on the staff.

Furman claimed a share of the Southern Conference regular season title in 2016-17, posting a school-record tying 23 victories and a 14-4 conference mark. After falling in the quarterfinals of the SoCon Tournament, the Paladins advanced all the way to the semifinals of the CIT.

Furman’s trip to Rocky Top represents a homecoming for reigning SoCon Player of the Year Devin Sibley. A Knoxville native and Karns High School graduate, Sibley averaged 17.7 ppg while boasting impressive shooting percentages of .522 from the field and .449 from three.

The Paladins enter the contest riding a five-game winning streak and have won seven of their last eight after starting the season 2-2. Over the last four games, Furman has averaged 94.3 ppg.

Kevin Whitted came off the Tennessee bench to score 17 points and lead the Vols to a 68-51 win over Furman at Thompson-Boling Arena on December 31st, 1994.

Kevin O’Neill was in his first season as UT’s head coach after replacing Wade Houston.

Whitted scored 13 of his 17 points in the second half as the Vols pulled away from the Paladins late in the game.

Damon Johnson scored a then-career-high 14, and Shane Williams hit 4-of-6 from 3-point range to add 12. Steve Hamer led the Vols with eight rebounds and had nine points.

With the Vols leading by seven (55-48) with 5:51 remaining, Tennessee ended the game on a 13-3 run to give UT a 5-3 mark on the young season (the Vols finished with just five total wins the year before).

Tennessee on December 4th made its first appearance in the AP top-25 poll since 2010—nearly seven full years. The Vols landed at No. 24 in that week’s AP poll.

Tennessee is one of seven schools whose men’s and women’s basketball teams are both ranked in the latest Associated Press top-25 poll.

According to noted college basketball statistical analyst Ken Pomeroy of KenPom.com, Tennessee ranks fourth nationally with an assist rate of 68 percent (meaning that 68 percent of the Vols’ made field goals have been assisted on).

The Volunteers average 18.2 assists per game, which ranks second in the SEC and 20th in the country.

Head coach Rick Barnes—who is in his third season at Tennessee but his 31st season as a Division I head coach—is approaching a milestone.

The Vols’ home game against Texas A&M on January 13th will be Barnes’ 1000th career game as a collegiate head coach.

His 642 wins rank eighth among active Division I head coaches.

UNC was Showcase Game for UT

Last Sunday’s showdown vs. defending national champion North Carolina was Tennessee’s first home sellout since February 17th, 2015. The crowd of 21,678 was the seventh-largest crowd in the NCAA to date this season (fourth-largest non-neutral-site crowd).

A stunning visual was created in Thompson-Boling Arena via a human checkerboard of 21k fans coordinated through CheckerTBA.com.

J-Bird a Bucket away from 2K

90 of those games, and 1,933 of those points, were scored during Daniel’s standout career at Howard University.