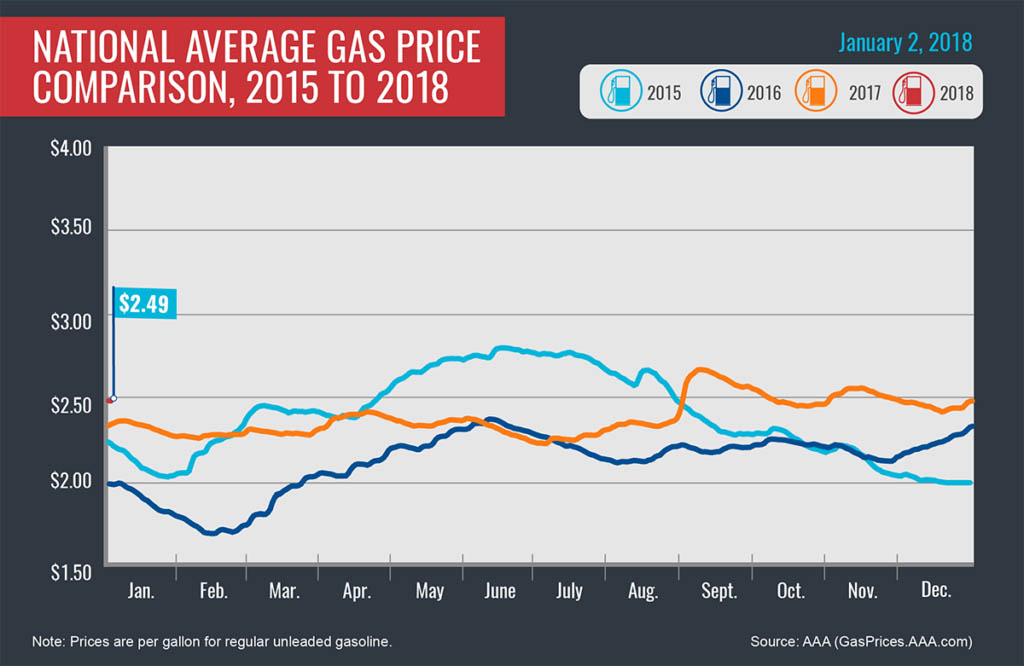 Tampa, FL – At $2.49, the national gas price average is the most expensive seen at the start of a new year since 2014, when gas prices were more than $3.00/gallon. High travel volumes over the holidays drove gas prices up five cents on the week.

At the start of 2018, motorists in the Northeast, South and the upper Midwest are seeing pump prices as much as 13 cents more expensive than last one week ago. 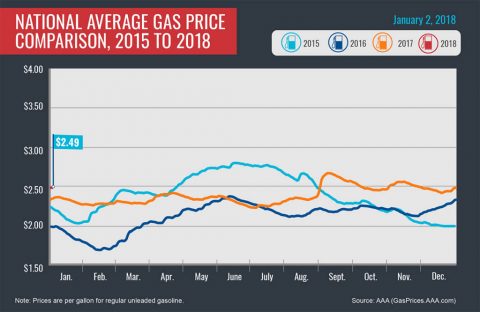 “Although prices at the pump shot up over the holidays, now that the holiday season in the rearview mirror, motorists can expect gas prices to trend cheaper this month as we are likely to see a significant drop in gasoline demand,” said Jeanette Casselano, AAA spokesperson.

The latest Energy Information Administration (EIA) report measures gasoline demand at a strong 9.5 million b/d, which is typical of the holiday season. However, historical data shows that in early January demand typical drops and stays below the 9 million mark for the first few months of the year.

According to EIA’s latest weekly report, the region’s refinery crude utilization rate hit a new record high at 96.3 percent, which is the highest level since the mid-2010s and well above the 80 percent rate seen at this time last year. In addition, gasoline inventories continue to measure above 30 million bbl. for a third week, positioning the region with a comfortable supply level as the year begins.

Across the region, gas prices have increased as much as 10 cents on the week with four states landing on this week’s top 10 states with the largest increases: Ohio (+10 cents), Michigan (+8 cents), Kentucky (+8 cents) and Kansas (+6 cents).

At $2.69, Michigan is selling the most expensive gas in the region, followed by Illinois ($2.63) and Indiana ($2.61). Missouri ($2.21) is selling the cheapest gas not only in the Great Lakes and Central states, but in the whole country.

Compared to beginning of December, Indiana (+24 cents), Michigan (+23 cents), Ohio (+15 cents) and Illinois (+12 cents) are the only states where gas prices have increased more than 10 cents on the month.

Gas prices in the South and Southeast remain among the cheapest in the country even with pump prices jumping in every state on the week except New Mexico (-1 cent). Motorists in Florida (+9 cents), Georgia (+8 cents), Texas (+7 cents), Mississippi (+6 cents), Alabama (+5 cents) and Arkansas (+5 cents) are seeing the biggest price increases in the region since Christmas Day.

Gasoline inventories had a 278,000 bbl. build on the week, bringing levels above the 84 million bbl. mark. This is one of the highest inventory measurements of 2017 for the region.

Gasoline inventory continues to measure above 7 million bbl. in the region, which is typical for this time of year.

On Friday, the final day of trading for 2017, WTI closed 58 cents up, reaching its highest price of the year: $60.42/bbl. Moving into 2018, prices are expected to continue rising as OPEC’s production reduction agreement will remain in place for the entirety of 2018.

2017’s increasing oil prices, especially in the fourth quarter, led to increased investment in production and drilling. This allowed the U.S. to reach its highest crude production level — 9.637 million b/d (October) — since April 1971, officially confirmed by EIA last week. This represents a roughly 10 percent gain from the same month in 2016 and a 167,000 b/d increase from September 2017.

For 2018, U.S. crude production is expected to hit 10 million b/d for the first time ever, helping the country to meet domestic demand and expand its export prowess to countries that have growing energy demands around the globe. The total number of active rigs, 747, is 222 more than the total active number of rigs at the beginning of 2017. No active oilrigs were added last week, according to Baker Hughes, Inc.