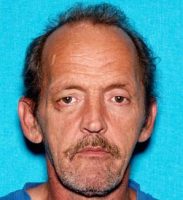 Woodlawn, TN – Just before 10:30am Friday morning, October 5th, 2018, Kirby Gene Wallace was taken into custody by Henry County Sheriff Monte Belew and Corporal Stacey Bostwick. This ended a week long manhunt for the 53 year old Wallace who was wanted for killing two people and injuring another.

Belew and Bostwick had left the search Thursday afternoon but were called back around 12:30am Friday morning because there was need of another track dog. Stacey Bostwick handles Rowdy one of Henry County’s blood hounds.

Belew and Bostwick ran a track and got a good direction of travel 2:30am or 3:00am. After that, the area was deemed a hot zone and teams began to work it.  Belew and Bostwick moved a little ahead of the hot zone into an open field.

Deciding to cover the field area, they discovered two deer stands about 50 yards apart. Bostwick took the one on the east side and Belew went up the one on the west side. Once at an elevated position, they were able to cover the large field and the wooded area.

About 10:15 am Friday morning, Belew saw someone moving to his right. The person came within 40 yards of Belew and stepped under an oak tree. At that time, Belew was able to identify him as the suspect. Wallace continued to walk towards Belew.  At about 25 yards, Belew drew down on him with his AR-15 and identified himself as Sheriff’s Office.

“He was very cooperative at first” said Belew.  “I asked him to step to me and put your hands out to the side. He did do that, but right before he got to me, he stepped behind a tree. He came out the left side of the tree with his hands around his waist,” stated Belew. “At that time, I anticipated being in a fire fight with him. Luckily, he put his hands back up, went down to his knees.”

While Belew covered him, Bostwick came down and got him laid face down. Belew then came down from the tree stand and together they cuffed him. A loaded handgun was found in his waistband.

“We were very fortunate that we didn’t wind up in a shootout with the suspect up there. It crossed his mind, because he told us it crossed his mind. He just thought that we had the drop on him so he didn’t take that action,” Belew said. “We are very thankful.”

When asked, “What was going through your mind when this happened”, Belew stated, “You don’t have time to think. You look up and you see someone walking towards you. Three seconds later you identify him as the suspect your looking for. You know he is possibly armed. You just react. You rely on your training and we started doing those proper tactics at that time.”

Belew continued, “The only time I really felt in extreme danger is when he stepped behind that tree and disobeyed the verbal command that I gave him. He did that in an attempt to pull his weapon on me. But for some reason he dropped his hands and decided not to at the last second. I am very thankful for that. It was a very tense moment.”

“We relied on our training after that, cuffed him up, got him in custody, relayed on the radio where we were at and that we did have him in custody. Then the troops came to us. TBI is working the scene from there. I feel very fortunate. You fall back on your training, you don’t have time to think,” stated Belew.

When asked how close he was to pulling the trigger, Belew said, “I can’t comment on that, but it was about as close as you want to be.”

“We have had one heck of a contingent of law enforcement professionals in this community for the last several days. We are very proud to bring it to the end that we did. I can just say, that on behalf of the public that we are very proud to have this day come. I know that we all want to get back to normal,” stated Montgomery County Sheriff John Fuson.

“We are proud that we stayed the course that we did. We are proud that we utilized the services that came to us from all over the state of Tennessee and even in our region, Federal, State, local, from everywhere. I couldn’t begin to talk about how many resources that have come in here. We were flooded with that,” Fuson said.

“I could not begin to thank the public for what they have done. Bringing the resources here for us to take care of the crews while they did that job,” Fuson stated. “We can get back to a sense of normalcy knowing that this criminal is in custody and will face justice for what he has done. I am very proud to say that, very glad to get back to normal.”

“I just can’t say thank you enough to everyone, especially Henry County, wow. We had been working so hard, everybody, throughout this whole thing, but Henry County has been a bull punching through there, staying forward of what we had and it paid off here today and we are very very proud of that. I just can’t think everybody enough, especially Sheriff Belew and his crew,” stated Fuson.

“I am very happy, relieved, a lot of emotions” said Stewart County Sheriff Frankie Gray.  “I am sad for the victims. I hope this brings some justice and helps start closure for some of them. What an effort. I’m wore out. I’ve been in office since September first. They told me at the Sheriff’s Association that Sheriffs are a tight knit group. I tell you what, they’re exactly right. We could not do this without everybody, but these two Sheriff’s (Fuson and Belew) are great. I’m telling you what, great. I hope I can be half the Sheriffs these two guys are.”

“Sheriff Belew and Corporal Bostwick, when your talking about professional and showing strength today, I’m telling you they did. It has been a tough experience. I just want everybody to know how proud we are of all these law enforcement officers and everybody,” said Gray.

“I was out almost every day with them. It’s been tough. There were a lot of times like Sheriff Fuson said that we could have changed course. We could have done things different. But we stayed the course because we knew that if we kept on and we were dedicated and we kept going on that path that we would see the end of this,” Grey stated.

“I want to thank all the agencies. Tennessee is lucky to have agencies and resources that comes together this past week. This has been a thirteen day ordeal for me and I’m just happy. I want to thank everybody. I can’t thank them enough.” commented Grey.

“To say that we are grateful doesn’t seem to quite do it justice. I want to say thank you to the citizens across this area. You vigilance, your support and your prayers, your patience, your donations have made all the difference. I can’t say thank you enough to our local, state and federal partners who have gone above and beyond to protect and serve these past few days. It’s a great day in the state of Tennessee and TBI is proud to have played a small part in it.” stated Tennessee Bureau of Investigation Assistant Director Dwayne Johnson.

“Wow, other than that, what a great day, a great day in Tennessee. Great, great day for this wonderful community, Montgomery County and Stewart County. These gentlemen here, the men and women who have been working non stop tirelessly in the command post and going over this extremely rough terrain day in and day out. Not only fighting the heat, insects, snakes and other dangers and hazards at the same time searching for a very dangerous criminal is a very humbling experience to be around on a day to day basis,” said Tennessee Highway Patrol Lt. Bill Miller.

“I am very proud to have been able to be a very small part of that. The leadership, partnership, teamwork and comradery not only from the law enforcement agencies that came here, but from the community. It is just an overwhelming feeling of love and support that law enforcement feels today from the community of this wonderful state. I just wanted to say thank you. Thank you to all of the prayers, all the food, the drinks and the nourishment we need to keep going. Thank ya’ll very much,” Miller stated.

“I am glad he is in custody. Everybody is tired. But this has been an absolute all out effort by every law enforcement agency in West Tennessee and Middle Tennessee. We couldn’t be more proud to be apart of it,” said Belew.

“We were lucky to get him in custody today without incident. But it was sheer luck. We just happened to be in the right place at the right time. Persistence pays off and that’s what we’ve done this week along with everybody else. We would like to thank the community. I told everybody that this is the only manhunt I’ve ever been on where I walked 10 miles and gained weight from the food here. The community support has been outpouring. We thank the community,” Belew stated.

After Wallace was taken into custody a medic did check his vital signs. They said he was operating in a normal range. They did hydrate him.

He is currently in the Stewart County Jail.