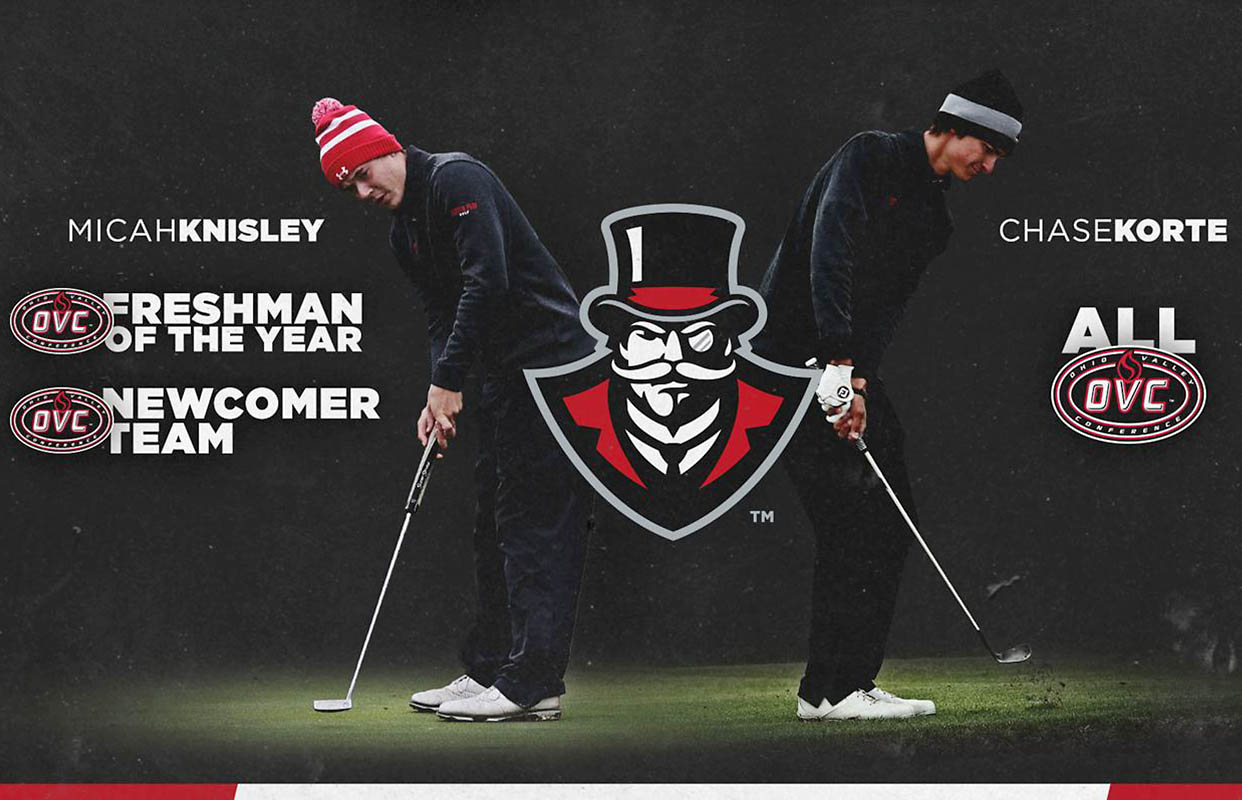 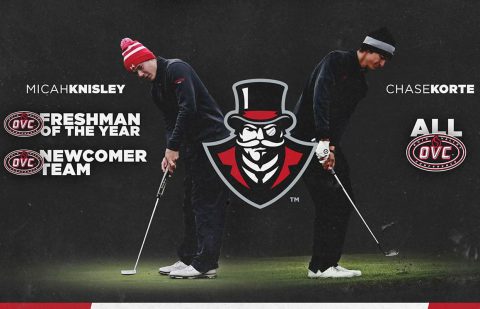 That was announced Sunday night at the annual awards banquet following the conclusion of the first round of play at the OVC Men’s Golf Championships.

Knisley also earned a spot on the All-Newcomer team, while sophomore Chase Korte made his second appearance in as many seasons as an All-OVC choice.

Knisley is the third player in program history to earn OVC Freshman of the Year honors; the first two, Grant Leaver in 2005 and Erik Barnes in 2007, would both eventually earn multiple All-OVC honors and eventually, enshrinement into the Austin Peay Athletics Hall of Fame.

A Jefferson City, Tennessee native, Knisley has been a welcome addition to the lineup, consistently performing near the top of the team standings and finishing in the top-20 twice, at the Golfweek Program Challenge (t-20th) and Wofford Invitational (t-11th). His 74.54 stroke average was the best by an OVC Freshman this season, aided by two rounds in the 60s and eight at or under-par.

Knisley announced his presence with authority in September, shooting a 69 in his very first round as a Governor and backing that up with a 71 in the next round. Save one round two weeks ago in Nashville, he’s closed the spring on a tear with three of his last five rounds at par or better, including another 69 in his last regular-season round at the Ryman Hospitality Intercollegiate, April 9th.

The second round—which is either an afternoon round in the typical collegiate game’s typical 36-18 format or moving day when the Govs played three rounds in three days—has seen Knisley raise his game to the highest levels. He’s averaging 72.89 strokes in round two, at par or better in five of nine round-two outings and posting his best single-round score in five of his nine tournament appearances during round two.

His appearance on the All-Newcomer team marks the third year in a row a Gov has been named All-Newcomer; he joins Korte from last season and Hunter Tidwell in 2017.

“Micah had such a solid year,” said Austin Peay head coach Robbie Wilson. “He probably learned as much from some of his bad rounds as his good ones. The experience he gained was so important, and being rewarded for his good play means a lot to him. He’s got a great future in store for us.”

Korte built on his All-OVC campaign from last season and has established himself as one of the OVC’s most reliable ball-strikers. He was Austin Peay’s top finisher in six of 10 tournaments, posting four top-10 finishes in his last seven tournaments to peak as he leads the Govs into the OVC Championships.

A consistent presence in the lineup, Korte is one of two players among Robbie Wilson‘s travel five each tournament, and counted 27 of 28 rounds he played. He led the Govs in rounds under par (12) and in the 60s (five), but was most remarkable in his ability to bring his A-game each day; while his 72.50 stroke average overall was a team-best, he didn’t average higher than 73.50 in any round and never shot higher than a 77 at any point in 2018-19.

It took a while for Korte to get going during the fall—he didn’t record his first top-10 until Austin Peay’s home tournament in mid-October—but once he did, he was unstoppable. He followed a ninth-place finish at the F&M Bank APSU Intercollegiate with a seventh-place finish to close the fall at the Pinetree Intercollegiate in Kennesaw, Georgia.

Korte closed the regular season with back-to-back top-10 finishes, beginning with a season-best third-place showing at the Wofford Invitational, April 1st-2nd. That tournament featured back-to-back rounds in the 60s, the second time this season he had two rounds in the 60s in the same tournament and the only time to this point during which he’s done it in back-to-back rounds. He finished the regular season with a 10th-place showing at the Ryman Hospitality Intercollegiate.

Korte is the first Gov since Anthony Bradley (2011-12) to earn All-OVC in each of his first two seasons and just the third to do so since the turn of the century. Despite being a veteran of the league at large and for the Govs, the sophomore is one of just three freshmen or sophomore players across the OVC to earn All-OVC honors.

“Chase is one of the better players in the conference, obviously,” Wilson said. “He keeps getting better each year and the sky is the absolute limit for him. Getting the recognition he deserves is important to him, but I know winning this week is just as important to him.”

Korte, Knisley and the Govs return to action Monday morning as second-round play at the 2019 OVC Championships from the Fighting Joe course at the Robert Trent Jones Golf Trail stop at The Shoals.