Montgomery, AL – Following a 2019 campaign that saw it reach the NCAA FCS Playoff’s Elite Eight, the Austin Peay State University (APSU) football team has accepted an invitation to play in the 2020 Guardian Credit Union FCS Kickoff. The Governors will face Central Arkansas in the Saturday, August 29th, 2020 event at the historic Cramton Bowl in Montgomery. 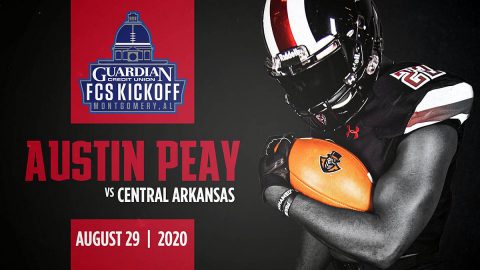 Austin Peay State University becomes the second Ohio Valley Conference member selected to play in the event after Jacksonville State represented the OVC in the 2017 and 2018 editions.

“We could not be more excited to participate in the Guardian Credit Union FCS Kickoff,” said Gerald Harrison, APSU Director of Athletics. “This game provides us an opportunity to display the Austin Peay State University spirit on the national stage.”

“I know our student-athletes and all of Stacheville will enjoy the southern hospitality provided by the great folks in the City of Montgomery. Many thanks to Johnny Williams, the selection committee, and ESPN for this gargantuan opportunity,” Harrison stated.

“It is an honor to accept the invitation to play in the Guardian Credit Union FCS Kickoff Classic in Montgomery and represent Austin Peay State University,” said APSU head football coach Mark Hudspeth.

“Our team is honored to be one of only two teams selected to play in Week Zero. We look forward to the opportunity to open the season on ESPN’s network and showcase our program, our university and the city of Clarksville,” Hudspeth stated.

Austin Peay State University and Central Arkansas met in 2019 with the Bears escaping with a 24-16 victory in Week 2. The teams were scheduled to meet in Conway, Arkansas, in 2020 before the sides agreed to move the game to Montgomery. Both the Governors and Bears played in the 2019 FCS Playoffs; APSU reached the quarterfinals while Central Arkansas fell in the second round.

The kickoff time and television network, along with ticket information, will be announced at a later date.