Washington, D.C. – AAA says Gas prices continue to increase, with the national average up nine cents on the week to $2.72. That is a 30 cent increase from the beginning of February, 28 cents more than a year ago, and the most expensive daily national average since August 2019.

The latest price jumps are a direct result of February’s winter storm that took 26 U.S. refineries offline and pushed refinery utilization from an average of about 83% down to an atypical low of 68%, according to the Energy Information Administration (EIA).

In its latest data, EIA also reported demand at 7.2 million b/d. Both utilization and demand rates have not been reported this low since last May.

AAA forecasts the national gas price average to hit at least $2.80 in March. For motorists, that means they can expect continued increases of at least 5–10 cents in local markets until refinery operations are stable.

“Barring hurricane season, March may bring the most expensive pump prices of 2021,” said Jeanette Casselano McGee, AAA spokesperson. “While the month is roaring in like a lion, by the end of it we could see some relief at the pump as refineries resume normal operations, especially if crude oil prices show signs of stability.”

Today, every state average is more expensive on the week and the month. Only three states have averages cheaper year-over-year: Hawaii (-10 cents), Alaska (-7 cents), and Oregon (-3 cents). 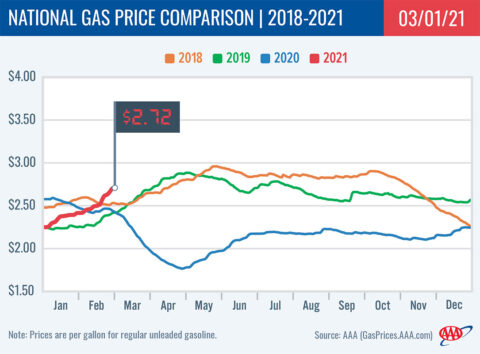 At the close of Friday’s formal trading session, WTI decreased by $2.03 to settle at $61.50. Although a stronger dollar and market concerns regarding interest rates pushed crude prices lower to end the week, prices increased over $2.00 earlier in the week—up to $63.22—due to growing market optimism that as vaccines become more available, crude demand will recover.

Motorists can find current gas prices along their route with the free AAA Mobile app for iPhone, iPad and Android. The app can also be used to map a route, find discounts, book a hotel, and access AAA roadside assistance. Learn more at AAA.com/mobile.