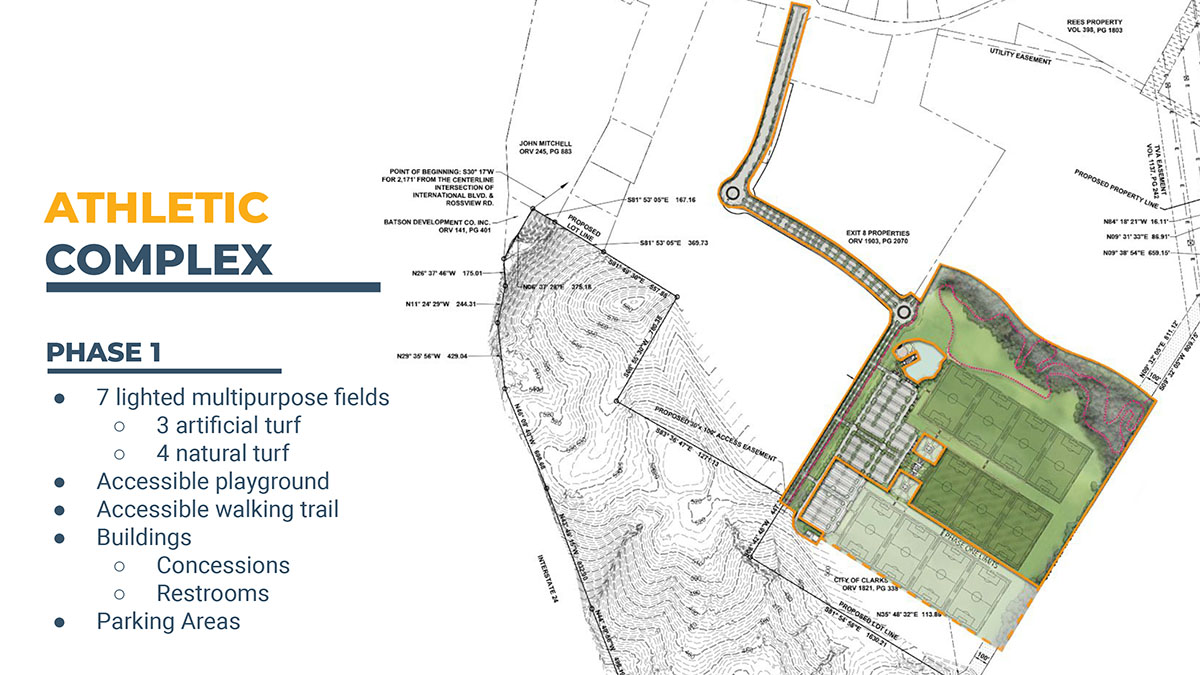 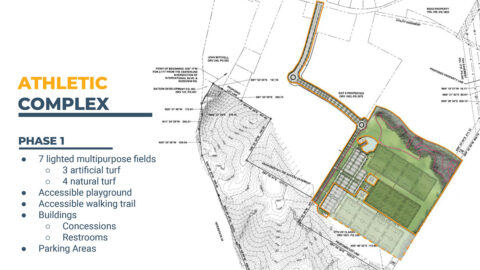 Architectural and engineering plans for Phase 1 of the Athletic Complex on Rossview Road show seven lighted multipurpose fields — three with artificial turf and four with natural turf — an accessible playground and accessible walking trail, buildings for concessions, and restrooms, and parking areas.

The plans by Lose Design also envision four more natural turf fields that would be graded and seeded in Phase 1, but would be built out with lighting and other features in a later phase.

Phase 2, on the northern part of the property, is expected to include a baseball/softball complex, open-air pavilions, and more parking. It will be designed and constructed over the next few years.

Council to consider sale of 140 acres for solar energy project

In a recent development, Mayor Joe Pitts announced a proposal to sell 140.2 of the 347.5 acres acquired in 2018 for the Athletic Complex to Silicon Ranch, a Nashville company that builds and operates solar power generating facilities. Today, Silicon Ranch has 140 active sites in 14 states across the country.

In Clarksville, the solar farm would be built on the sloping acreage on the southern side of the athletic complex tract that earlier was envisioned for use as hiking trails. Silicon Ranch would sell up to 15 megawatts of solar power generated at the site to CDE Lightband, the City of Clarksville’s power and broadband services utility. CDE Lightband says that amount of power would provide 56 percent of the electricity needed for City of Clarksville government buildings, streetlights, and other facilities.

Under a purchase agreement being considered by the City Council, Silicon Ranch would buy an option to purchase the property. Ultimately, if Silicon Ranch executes the option, it would pay $3,360,000 for the 140.2 acres. The City of Clarksville in 2018 purchased the full 347.5 acre site for $4,083,000. After the sale, the city would retain about 207 acres for development of Phases 1 and 2 of the Athletic Complex.

The Clarksville City Council appropriated $14.6 million for Athletic Complex design and construction in its Fiscal 2021 budget amendments approved in October 2020. Mayor Pitts said the $3.36 million generated by the sale of land to Silicon Ranch would be added to the Athletic Complex capital project.

The Athletic Complex project will also require the City to construct an access road from Rossview Road to the athletic fields, the Silicon Ranch property and other commercial land being developed nearby.


CDE Lightband would buy, distribute up to 15 megawatts of solar power.

Under the plan presented by Mayor Pitts and City Departments, CDE Lightband — with the blessing of TVA — would construct a power substation on the northeast corner of the Athletic Complex to transfer the electricity from the Silicon Ranch operation into the CDE system.

Brian Taylor, CDE Lightband General Manager, told the joint committees that a former contract with TVA contained an “All Requirements” clause requiring that CDE Lightband buy power only from TVA. Recently, as TVA has pursued alternative and renewable energy sources, a new contract allows CDE Lightband to self-generate or purchase up to 5 percent of total power needs from sources other than TVA. Thus, CDE Lightband now may purchase up to 22.4 megawatts of solar generation from outside sources, such as Silicon Ranch.

Silicon Ranch would own, operate solar facility near complex

Under the plan being considered, Silicon Ranch would purchase the 140 acres and build a solar facility with an average monthly generation of 15 megawatts. This would yield 2,235,000 kilowatts per hour, which could power the equivalent of 1,863 households, or 56 percent of the electricity needed to serve City of Clarksville buildings, streetlights and other municipal power needs.

Since CDE is authorized by TVA to acquire up to 22.4 megawatts of solar power, Clarksville’s power utility would still have capacity to add up to 7.4 megawatts of renewable energy from other projects.

Based in Nashville in 2011, Silicon Ranch is the U.S. solar platform for Shell and one of the largest independent solar power producers in the country.

Silicon Ranch uses a “develop-to-own” approach to its solar farm projects, and has a 100 percent track record of seeing them through from start to finish. Its portfolio includes 140 solar farms across 14 states from New York to California, including the first large-scale solar projects in Georgia, Tennessee, Arkansas, and Mississippi.

Silicon Ranch has also pioneered a development strategy it calls Regenerative Energy, a program for solar power plant design, construction, and operations that uses regenerative agriculture practices at some of its solar farm sites.

In conclusion, Mayor Pitts outlined what he described as “major benefits” of the current Exit 8 Athletic Complex plan. They are:


After hearing the presentation and asking questions, members of the Finance & Revenue and Parks & Recreation committees voted unanimously to recommend approval of the land sale to Silicon Ranch. The ordinance is expected to be introduced on first reading at the May 6th City Council meeting.

Background OF The Athletic Complex Project

Preliminary planning by Lose Design outlined a complex with multipurpose fields for community use and tournament level sites for youth soccer, baseball and softball. A site-selection process was begun.

The Clarksville City Council in June 2017 approved Capital Project funding in the 2018 budget to purchase the recommended site near Exit 8 and move forward with the multipurpose Athletic Complex.

The Tennessee State Soccer Association reached out to the City in late 2017, and discussions began about the association’s desire to partner with a Midstate municipality to build a major TSSA soccer tournament facility for community and tournament use.

The Council voted 8-4 in May 2018 to spend roughly $4 million to purchase 305.5 acres at Exit 8. The City completed the process to annex the property and the nearby commercial tracts in October 2018.

Lose Design refined the preliminary design of a comprehensive Athletic Complex at the Exit 8 site that would be built in several phases over the next 20 years. The plan included the TSSA soccer facility; a baseball/softball tournament facility; playgrounds, picnic areas, and a hiking trail.

The City formally presented its plan to TSSA on December 1st, 2018, but the association’s board chose a competing proposal submitted by the City of Murfreesboro.

Despite that disappointment, the Exit 8 site remained primed for a multipurpose Clarksville Athletic Complex to add new recreational facilities — especially soccer fields — for use by Clarksville families.

Throughout the various iterations of the Athletic Complex, these facts remain unchanged: