Florence, AL – Senior goalkeeper Peyton Powell recorded her first career shutout, and freshman Alec Baumgardt found the back of the net for the first time in her career to lead the Austin Peay State University (APSU) soccer team to a 1-0 win over North Alabama, Sunday, at the Bill Jones Athletic Complex.

Austin Peay (2-4-1) came out on the attack, with Rachel Bradberry testing North Alabama (0-6-2) goalkeeper Payton Yates with a shot on goal in the first minute of the match. Anna McPhie and Claire Larose also put shots on target in the 17th and 24th minutes, respectively, but the Governors were not able to best the Lion’s keeper in the first half.

Making her first start in net since the second match of the season at Lipscomb, Powell made a pair of saves in the first half to keep the score tied, 0-0, after 45 minutes of action. 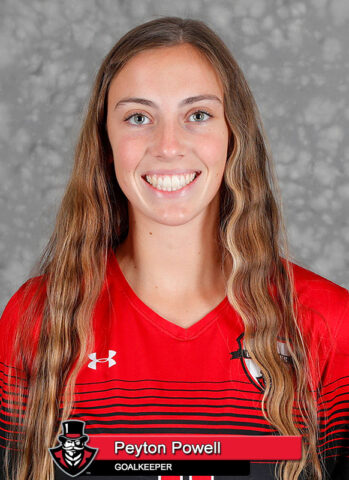 In the 56th minute, Tori Case sent the corner kick into the goal area, where it was headed by a North Alabama player before Baumgardt collected the loose ball at the top of the 18-yard box, avoided a defender, and fired a shot past the Lion’s keeper with her left foot to give the APSU Govs the lead, 1-0.

Baumgardt’s goal was assisted by Case and was the final tally of the match, as Powell recorded her first career clean sheet and the first solo shutout by an Austin Peay State University goalkeeper since Mary Parker Powell shutout Cincinnati in a 0-0 double-overtime draw on September 21st, 2019. Mary Parker Powell and Chloé Dion also combined to shutout Morehead State on October 18th, 2019.