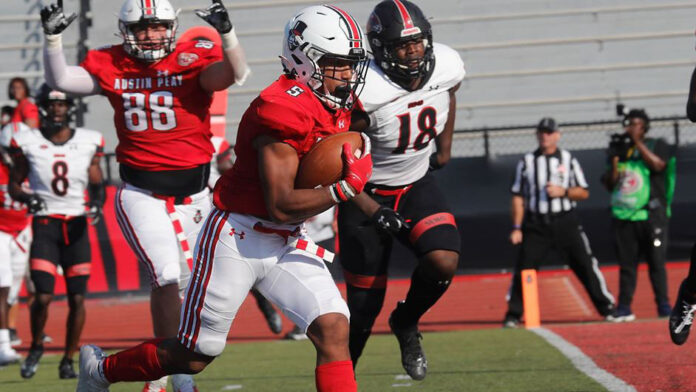 Austin Peay (2-4, 0-1 OVC) ran into trouble in the game’s opening minutes when a muffed punt allowed Southeast Missouri to reestablish a drive at the APSU 12-yard line. The defense held the Redhawks to three points, limiting the potential damage.

The Governors would get on the scoreboard before the first quarter’s end. They manufactured a 12-play, 85-yard drive – the second longest scoring drive of the season – and Ahmaad Tanner scampered into the end zone from five yards out for the touchdown. Austin Peay State University went for two and converted when Trey Goodman also ran into the end zone, narrowing the deficit to 9-8.

Southeast Missouri would score the second quarter’s only points on a 16-play, 78-yard drive and held a 16-8 lead at the break. On the other side of halftime, the Redhawks were unable to do anything with their first drive.

Yet the SEMO defense helped again when Dony’e Taylor intercepted a pass on the following Governors drive and returned it 39 yards to the APSU 19-yard line. Two plays later, Hess battled his way into the end zone from five yards out and the Govs trailed by two scores, 23-8.

Austin Peay State University would claw back to 23-14 on its next drive, which was highlighted by Tanner’s 53-yard touchdown run. However, that would be their final score with their next five possessions resulting in two turnovers on downs, two interceptions and a fumble.

Hess closed the scoring with his third touchdown of the day with 1:39 left in the third quarter, capping a 28-carry, 116-yard day.

Ellis posted his third straight 50-pass outing, ending the day 28-of-53 passing for 259 yards. However, the Govs sophomore quarterback was held without a touchdown pass for the second time in his career. Tanner rushed for both scores as part of his 12-carry, 63-yard outing.

APSU 0, SEMO 3 – The APSU defense held Southeast Missouri to a five-play drive on its opening possession but a muffed punt deep in Austin Peay territory gave the Redhawks the ball again. Pinned at its own 11-yard line, the Govs defense held firm, forcing a three-and-out. The Redhawks settled for a 27-yard Kenny Doak field goal.

APSU 8, SEMO 9
After the Govs forced a SEMO three-and-out, they took over possession on their own 15-yard line after a 49-yard punt. APSU used three plays to get out of their end, Ellis finding Harley for a 20-yard completion to reach SEMO territory. Brian Sneed then hit a 19-yard run and an 8-yard run and the Govs were inside the red zone. Ellis-to-Harley for 12 and 8 yards followed before Tanner found a seam in the defense and hit the end zone for a 5-yard touchdown. Trey Goodman followed with a rush for a two-point conversion, cutting the deficit to a point.

APSU 8, SEMO 16
On the ensuing SEMO possession, the Redhawks moved methodically down the field with a 22-yard Jalyn Williams-to-Zack Smith completion, a 13-yard Williams rush, and a 12-yard Geno Hess rush helping convert the drive’s three first downs. Austin Peay State University forced a field-goal attempt at the five-yard line, but a roughing the kicker penalty revived the SEMO possession. The Govs defense denied the Redhawks on their first three plays, but Hess rolled into the end zone for a two-yard touchdown with the PAT kick extending the lead back to eight points.


APSU 8, SEMO 23
After the Govs third turnover of the day, Southeast Missouri started its opening drive of the second half at the APSU 19-yard line. The Redhawks kept it in Hess’ hands with his carries of 14 and five yards resulting in a touchdown. The PAT kick conversion extended the SEMO lead to 15 points.

APSU 14, SEMO 23
On the ensuing possession, Southeast Missouri elected to pooch kick to the second line of the Govs return unit, with Austin Peay catching the kick on the 39-yard line – its best starting field position of the day. After a 10-yard Ellis completion to Harley, Ahmaad Tanner bounced a run to the right and ran along the boundary for a 53-yard touchdown. The Govs two-point pass by Goodman failed, keeping the deficit more than a possession.

APSU 14, SEMO 30
The scoring continued on the game’s next possession with Southeast Missouri using 17 plays to march 75 yards. The Redhawks had only one 20-yard play on the drive, Williams connecting with Zack Smith for a 21-yard completion on 3rd-and-8 to avoid the three-and-out. After the Govs stopped a 1st-and-Goal on their own one, Hess charged in from the two-yard line to extend the SEMO lead back to two possessions.

After six straight games to open the season, the Austin Peay State University football team gets its off week during the upcoming week before starting the second half of its regular-season schedule. The APSU Govs open the second half in two weeks when they meet Murray State in a 2:00pm, October 23rd contest in Murray, Kentucky.