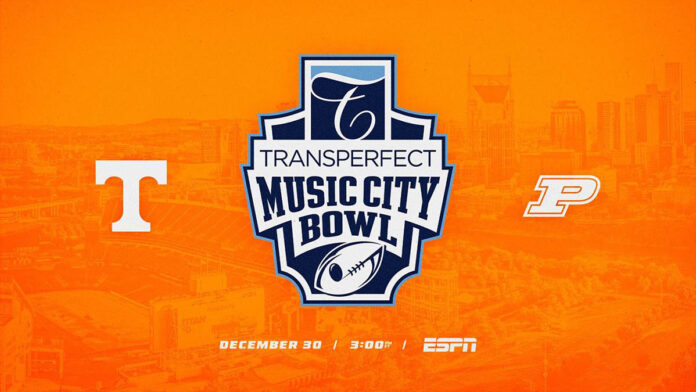 Knoxville, TN – After seven victories and establishing one of the nation’s top offenses in Josh Heupel‘s debut season, Tennessee football will culminate 2021 in Nashville as the Volunteers face Purdue in the TransPerfect Music City Bowl on December 30th, 2021 in Nissan Stadium.

Tickets for the game are on sale now at musiccitybowl.com.

“There is extraordinary love and support for the Vols in and around Nashville, and it will be incredible to see Big Orange fans from all across the country converge in the midstate to celebrate our football team during bowl week. We’re all incredibly proud of our football student-athletes, coaches, and staff for earning this postseason opportunity,” stated White.

“We are excited about finishing this first season in our home state in the TransPerfect Music City Bowl,” Heupel said. “It’s a great opportunity for us to put the finishing touches on the positive momentum we have created over our first 11 months. I am especially thrilled for our seniors, who get one more chance to compete. Purdue is an outstanding and well-coached team. I look forward to seeing all of Vol Nation in Nashville, and I know our team has appreciated your support the entire season.”

Heupel becomes the fifth Vol coach in the past 70 years to lead the Vols to a bowl berth in his debut season.


It will be Tennessee’s 54th all-time bowl appearance, which ranks fifth nationally. It will also be the Vols’ third Music City Bowl appearance. UT topped Nebraska, 38-24, in the 2016 edition of the game. The Vols dropped a 30-27 double overtime game to North Carolina in the 2010 Music City Bowl.