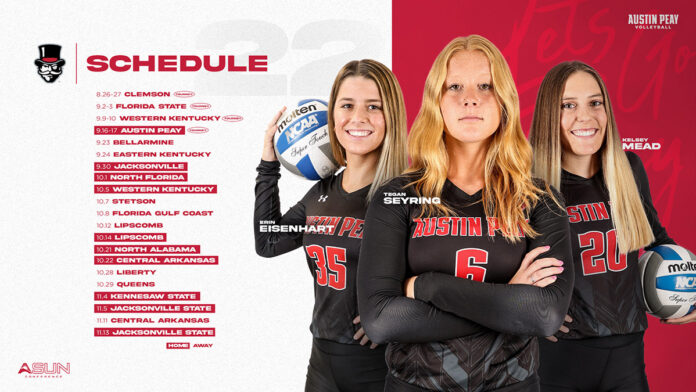 Austin Peay State University opens its season and a three-week road swing, August 26th-27th, at the Big Orange Bash hosted by Clemson where it opens against Louisiana Tech and the Tigers, followed by Presbyterian the following day.

The Governors travel to the Sunshine State, September 2nd-3rd, for the Seminole Volleyball Invitational and a pair of first-ever meetings against Florida A&M and Florida State. The Rattlers and Seminoles are two of four opponents that made the NCAA Volleyball Championship last season.

The Govs head to the Bluegrass State for Western Kentucky’s Holiday Inn – University Plaza Invitational, September 9th-10th. After facing Northern Kentucky to open the invitational, APSU begins an afternoon doubleheader against Toledo, followed by their contest against the Hilltoppers.

The 2021 Conference USA Regular Season and Tournament Champions, Western Kentucky advanced to the second round in the 2021 NCAA Volleyball Championship as the No. 17, before falling to No. 8 Georgia Tech.

After 21 days on the road, the Govs return home to host the Governors Challenge, September 16th-17th.

The Governors begin their 16-match ASUN slate on the road against Bellarmine, on September 23rd, and Eastern Kentucky, on September 24th, before hosting its first-ever ASUN home match against a familiar foe Jacksonville State, on September 30th.

Remaining home to kick off October, the Govs host North Florida, on October 1st for its first-ever contest against the Ospreys.

The Govs take a quick break from ASUN action when they host Western Kentucky, on October 5th, in the Winfield Dunn Center.

APSU travels back to the Sunshine State to begin their longest road trip of the conference slate against Stetson, on October 7th, and their first-ever matchup against the 2021 ASUN Volleyball Champions, Florida Gulf Coast, on October 8th.


Last season, the Eagles defeated Texas Tech, 3-2, in the first round of the NCAA Volleyball Championship before falling to the would-be 2021 NCAA National Champions in Wisconsin.

Returning to Clarksville for a three-match homestand, the Govs host Lipscomb, on October 14th, North Alabama, on October 21st, and Central Arkansas, on October 22nd, before finishing the month on the road against Liberty on October 28th and Queens on October 29th.

For news and updates ahead of the APSU Governors’ season opener in at the Big Orange Bash in Clemson, South Carolina, follow the volleyball team on Twitter (@GovsVB) and Instagram (@GovsVolleyball) or check back at LetsGoPeay.com for news and updates.