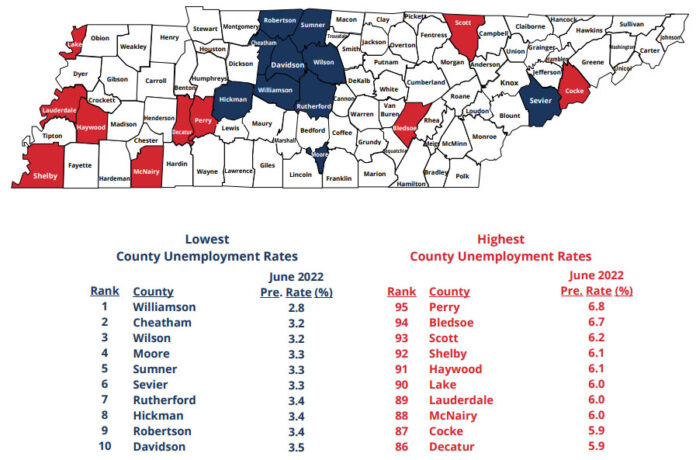 Nashville, TN – School employees on their yearly summer break were one of the factors that impacted the June 2022 county unemployment rates, according to the Department of Labor and Workforce Development (TDLWD).

The latest statistics showed, as they typically do in June, jobless numbers increased in each of the state’s 95 counties.

Statewide, unemployment remained unchanged between May and June at 3.3%. The state rate is seasonally adjusted to consider seasonal impacts, like school breaks, while county unemployment data is not adjusted.

Montgomery County unemployment rate was 4.5 percent in June. This was an increase of 0.8 percent from May’s 3.7 percent.

TDLWD has a complete analysis of the June 2022 county unemployment data, including labor force estimates for many of the state’s cities, which is available here.

There are many paths to employment across the state and TDLWD offers both in-person and online assistance to job seekers. The Department’s www.TNWorkReady.com website puts all of those services in one convenient location. From www.TNVirtualAJC.com, which outlines the programs available, 24/7 on the job seeker’s schedule, to an interactive map that easily identifies where to find the state’s American Job Centers.