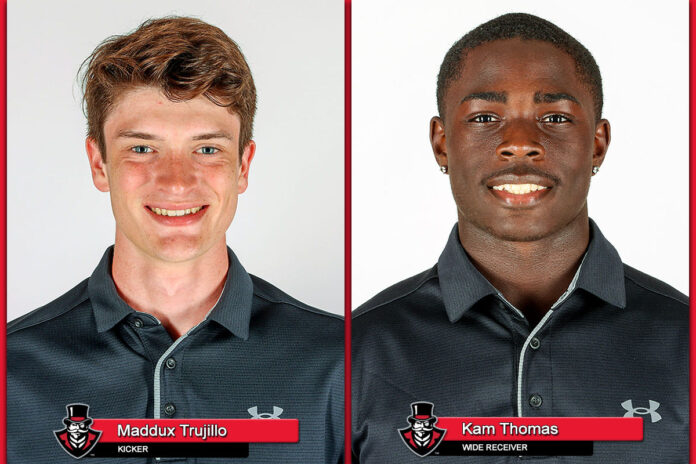 A Flowery Branch, Georgia, native, Trujillo drilled a 41-yard field goal in the first quarter of the season opener at Western Kentucky. It was his ninth consecutive game with a field goal made, extending his program record.

In the third quarter, Trujillo drilled a career-long 49-yard field goal, which was the longest by a Governor since Logan Birchfield hit a 49-yarder against North Carolina Central in the 2019 season opener at Fortera Stadium.

Trujillo capped off his perfect day by going 3-for-3 on point-after attempts.

After missing the end of the 2021 season with an injury, Thomas picked up right where he left off in the season opener at Western Kentucky. After fair catching the first two punts of the afternoon, the Birmingham, Alabama product broke several tackles and put together a 33-yard return that set the Govs offense up on the Western Kentucky 41-yard line, leading to three points.

Trujillo and Thomas are the first-ever Governors to earn ASUN Conference weekly football awards. They, along with the rest of the APSU football team, will be back in action when they host a Saturday 6:00pm contest against Presbyterian for the 2022 home opener at Fortera Stadium.

Single game tickets for the 2022 football season can be purchased at LetsGoPeay.com/buytickets or by calling the Austin Peay State University Ticket Office at 931.221.PEAY (7329). The season opener against Presbyterian is also Faith and Family Night and group tickets can be purchased at a discounted rate when you use the code “faith22.”