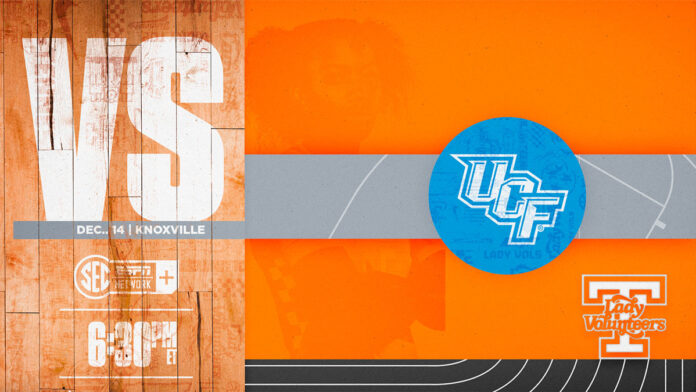 Knoxville, TN – The Tennessee women’s basketball team (6-5) will put a two-game winning streak on the line Wednesday, as UCF (6-2) comes to Thompson-Boling Arena for a 5:32pm CT contest that closes out a six-game home stand for the Big Orange.

UT remains in a stretch of playing nine out of 11 games on The Summitt between November 25th and January 5th.

Coach Kellie Harper‘s squad enters the battle with the Golden Knights having won four of its last five contests, defeating Wright State the last time out on Sunday afternoon, 96-57, on The Summitt. The Lady Vols went into that match-up knowing they’d be without senior center Tamari Key for the rest of the season, after it was announced on December 8th that testing revealed blood clots in her lungs.


They did, however, see two other key players return to the lineup, as senior forward and leading scorer Rickea Jackson returned from missing two games due to coach’s decision, and graduate forward Jasmine Franklin was back in action after being in concussion protocol in successive contests.

Tennessee continues to work its way back above .500 after a treacherous opening schedule featuring No. 3 Ohio State, No. 4 Indiana, No. 6 Virginia Tech, November 10th UCLA and Nov. 23 Gonzaga gave it all it could handle while dealing with unavailable players that have resulted in six different starting lineup combinations and 10 total missed games.

After opening the year at 6-0, UCF has dropped its last two contests, falling 86-46 at Auburn on Dec. 3 and 63-56 to Seton Hall on December 11th. The Golden Knights are under the direction of Sytia Messer, a long-time member of Kim Mulkey’s staff at Baylor and then LSU. Messer came onboard in Orlando after Katie Abrahamson-Henderson departed to take over at Georgia.

UCF and UT face off for only the second time after meeting in Orlando last season on Nov. 12 in a game the Lady Vols claimed by a 49-41 count.

The autograph player of the game is Jessie Rennie.

Tickets are available at AllVols.com.

The game will be streamed on SECN+, with Andy Brock (PxP), Kamera Harris (Analyst) and Sarah Detwiler (Reporter) on the broadcast.

The Lady Vol Network broadcast also can be heard on satellite radio via SiriusXM channel 380, and via channel 970 on the SXM App.

Tennessee has a chance to extend its winning streak to three games on Wednesday night. That’s something the Lady Vols last did when they put together a nine-game streak from December 20th, 2021, to January 23rd, 2022.

UT recorded a school-record 84.6 shooting percentage for a quarter in the third frame vs. Wright State.

Over the past five games, Tennessee has limited its foes to shooting 38 percent or lower.

The Lady Vols have held seven of their past eight opponents under 40 percent shooting, with UCLA’s 43.5 effort serving as the exception.

Tennessee has climbed to No. 24 nationally in rebound margin with that number vs. WSU.

Jordan Horston and Rickea Jackson have both scored in double figures the past eight games they’ve played, with Jackson hitting for 10+ in every game but the first and Horston having done so in each game she played except for the UMass contest in which she was knocked out by an injury in the second quarter.

A trio of inside players is all hitting above 60 percent from the field, including Jasmine Franklin (.667), Jillian Hollingshead (.636), and Karoline Striplin (.609).

The Big Orange’s top three scorers by average in the last five games have been Jordan Horston (18.2), Rickea Jackson (17.3), and Jillian Hollingshead (8.8).

Tennessee has held foes to single digits in seven separate quarters over the past six games, including vs. five different opponents.

The UT Lady Vols had a run of three straight quarters where they held opponents below 10 in the final quarter vs. No. 9 Virginia Tech (8) and the first two frames vs. Chattanooga (8, 7).

What Doesn’t Kill You Makes You Stronger

Tennessee has already played five top-25 opponents, including four teams that currently reside in the top 10 and three amongst the top 6.

The Big Orange women are set to face three teams from the 2022 NCAA Final Four (South Carolina, Stanford, UConn) and missed the opportunity to potentially meet a fourth (Louisville) in the Battle 4 Atlantis.

Greg Brown, associate head coach for the Golden Knights, was a graduate assistant for Pat Summitt in 2002-03 and served as an assistant coach at Tennessee in 2003-04.

Tennessee Director of Athletics and Vice Chancellor Danny White was the A.D. at UCF from 2015-21.

Vols head football coach Josh Heupel led the program at UCF from 2018 to 2020 before coming to Knoxville to take over UT’s program in 2021.

Looking Back At The Wright State Game

The Tennessee Lady Vols shot 59 percent from the floor to take a commanding 96-57 victory over Wright State in Thompson-Boling Arena on Sunday.

Four players were in double figures for Tennessee (6-5), with senior Rickea Jackson leading the charge with a 17-point effort on 6-of-9 shooting from the floor and a perfect 5-of-5 mark from the free-throw line.

Sophomore Sara Puckett turned in a season-high 16 points, and senior Jordan Horston and graduate Jasmine Franklin each tallied 14.  Franklin’s total also was a season-best, coming after missing the past two contests due to injury.


A Look At The Golden Knights

UCF got off to a 6-0 start but has dropped its last two games to enter Wednesday at 6-2.

Destiny Thomas, a 6-foot-2 senior forward, paces the Golden Knights with a double-double average of 13.1 points and 12.4 rebounds.

The Golden Knights allow only 58.1 points per game and 33.5 percent shooting from opponents.

Head coach Sytia Messer is in her first season leading the program after serving as an assistant under Kim Mulkey at Baylor from 2014-21 and as associate head coach at LSU last season.

Despite a historic display by senior forward Destiny Thomas, the UCF Knights fell just short of their comeback bid Sunday afternoon, dropping their second straight game and their first at home, 63-56, to the Seton Hall Pirates at Addition Financial Arena.


Thomas was a force to be reckoned with on the glass throughout the contest, grabbing a career-high and program-record-tying 24 rebounds that aided the Knights in almost erasing a Pirates (8-3)  lead that grew to 15 points in the third quarter.

The UCF star added 16 points on 6-of-10 shooting from the field for her fifth double-double of the young campaign.

Mya Burns was the only other Golden Knight scoring in double figures with 15.

UT is 1-0 vs. UCF, and Kellie Harper‘s career record vs. the school mirrors that.

The Lady Vols are 36-4 vs. schools currently in the American Athletic Conference (AAC)

UT went 2-0 vs. the league last season in defeating UCF and South Florida.

Both head coaches are SEC products who played from 1995-99, with Kellie Harper at Tennessee and Sytia Messer at Arkansas. UCF assistant Tennille Adams also played at Arkansas.

In addition to SEC play, the players met in the 1998 NCAA Final Four semifinal, with Tennessee dominating, 86-58.

Jordan Horston returned to the lineup after missing the season opener and did not disappoint. The junior guard finished with her second-career double-double, recording 14 points, 11 rebounds, three assists, one block, and one steal in 30 minutes of action.

Thanks to a stifling defensive effort, UT (2-0) held its second-straight opponent under 50 points. The Lady Vols allowed the Knights (1-1) to shoot just 27 percent from the field and 3-of-13 beyond the arc while also forcing 24 turnovers.

The contest, which will mark only the second true road game on the season for the Big Orange, will be televised nationally on ABC.

This will mark UT’s first appearance at Stanford since December 18th, 2019. Later that season, “COVID” brought an immediate end to the campaign after the SEC Tournament. The pandemic eventually led to Stanford postponing its scheduled 2020 trip to Knoxville until 2021 and UT’s next journey to California to December 2022.

Interestingly enough, the Lady Vols and Cardinal will meet on the December 18th date for the fourth consecutive time and the fifth occasion in the past six clashes.