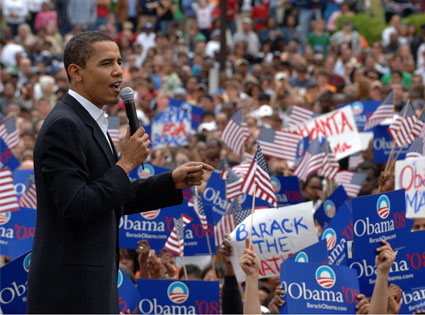 Barack Obama has me fired up. If you are still not a Obama believer, consider the following. To date Obama has won 30 of 44 primary races and caucuses has raised the most money of any candidate in the history of the primaries. The ability to out raise his competition alone is a great feat considering most of the 1.5 million individual donations have come from ordinary everyday citizens and since the Obama campaign has a strict rule of not accepting money from big business or corporations.

The power of this campaign however rest in his ability to use technology to attract younger and otherwise disinterested voters. When you visit his website, you can’t help but to notice how it grabs you and invites you to explore the various options. How it allows you to become directly involved in the campaign. Everything about this campaign empowers you and helps you feel like “Yes we can” make a change! People are catching Obama fever and his opponents can’t seem to find any way to stop it.

This is the primary reason his opponents have resorted to launching false attacks about his religion and nationality. Barack Obama was born in America, and raised as a Christian. 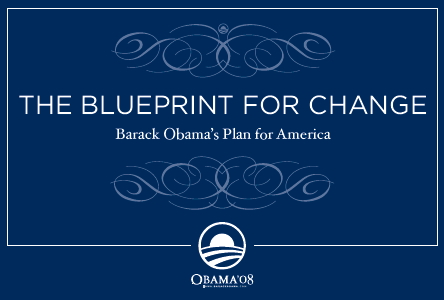 The blue print for change is the official Obama plan for America, his political platform. This 64 page document was written not for political scientists, but for everyday people, without the double talk in use by most politicians today.

Our political system is broken, and Barack Obama is ready to fix it. He wants to improve the lives of average Americans and take the necessary steps to restore America to its rightful place as the leader of the free world. Yes it may sound corny or unrealistic but change must come to our nation so lets start off on the right food by selecting Barack Obama as the Democratic nominee for the presidency of the United States.

Do I see skin color as a factor in the upcoming election? Sadly the answer is yes I do, but I also see the rainbow of faces, men and women from all nationalities and cultures who are backing the Obama campaign. I also see the issue of basic human rights finally being brought to the forefront of American politics. No longer will any Americans be excluded from our society!

Be sure to look over the special “know the facts section” it will give you tools to verify or clear up misinformation being spread about Senator Barack Obama. We encourage you to get to know Barack Obama as a candidate, and his platform for change.