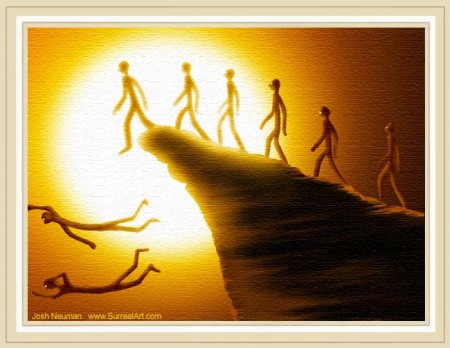 On the Road in America is an occasional and serendipitous column about people, places and observations, with publishing predicated on the random availability of internet access or lack thereof.

Being On the Road in America can sometimes be a bore.

Oh, there’s a great deal of beauty to be seen, from the Green Mountains of Vermont to the rolling farmlands across Ohio, from the rugged Rockies and the dramatic coastline of California’s 17-mile drive. That’s not the issue.

As implied in Josh Neuman‘s Lemmings (right) ,what is troubling is the growing lack of identity, of uniqueness, of individuality, as one moves from state to state. North, south, east or west makes not a whit of difference. Commerce in America is cloning itself at breakneck pace, mass-producing blueprints for hotels, motels, box stores, shopping malls and restaurants that increasingly lack a sense of their own identity and certainly have no ties to community heritage or culture.

I’m on the road again, as Willie Nelson would sing, and I am heading for one of the few bastions of non-traditional development — via the central midwest to the rural northeast, home of green mountains, clothing optional backwoods beaches, interstate bike paths, and those perpetual golden arches relegated to the outermost borders of some cities. 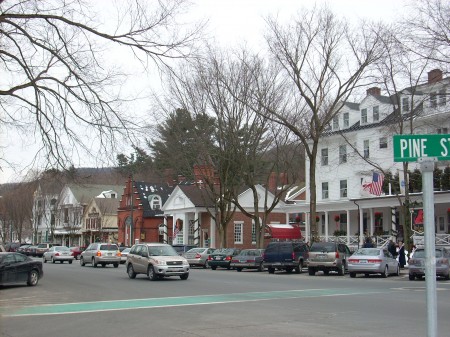 The “Main Street” of Norman Rockwell fame in Stockbridge MA (Pine is the cross street). Photo by Christine Anne Piesyk

Travelers seeking “something different” often have to search out small little “Main Streets” in small little cities and towns, taking that “road less traveled” literally, if they hope to find any sense of the individuality that America was once famous for. Yes, Norman Rockwell’s Main Street in Stockbridge remains essentially the same — I’ve had mulled cider at the Red Lion Inn there many times, and sat beside their fireplace with its chain of antique keys hanging from the mantle. Some small towns retain and cultivate their Main Streets specifically to draw in tourists and travelers with unique architecture and themes that either reflect their history or re-create themselves as a new destination, as a place people WANT to be. Paducah, Kentucky, just a few hours from Clarksville, has done this, and done it well, redefining itself and its development with art. Yet today, in most cases, moving from point to point across America is to journey through a litter of mass produced economy.

Day by day, America’s unique local vistas are being enveloped in rubber-stamped malls with the same rubber-stamped stores: JC Penney’s, Sears, Blockbuster, Circuit City, Best Buy, Avenue, Gap (and Baby Gap), Macy’s, Kohl’s, Fashion Bug, Foot Locker, and such. It’s not just the Smiths keeping up with the Jone’s anymore; we can’t tell the Smiths from the Joneses.

Not that you can’t find good merchandise or big sales in these stores; bulk buying and and blockbuster sales can produce great deals. It is the lack of uniqueness, the absence of originality and creativity, that quickly becomes boring. This lack of diversity in the cloning of America converts shoppers into clones of one another. My own take on this: if everybody has it, I don’t want it.

It’s the same with eateries; McDonald’s, Burger King, Wendy’s, Subway (I do favor Subway), and Arby’s are epidemic. Applebees, Cracker Barrel, Pizza Hut, Ruby Tuesday, Chicago Pizza, Pizzaria Uno and others in a slightly higher price range are everywhere. When I travel, I don’t opt for a sure thing — I know what I have had. If I wanted more of the same I could stay home.

I deliberately seek out the non-chains, the mom-and-pop hole-in-the-wall places where the locals eat, a long narrow diner, or a small country inn with unique menus and local foods. It’s why I’ve bought lobsters directly off the boat on Cape Cod, savored deep fried wild turkey tenders, Moose steak, caught my own 23 pound catfish on Lake Champlain, mulled over the taste of venison in a hunter’s stew in northern New England, and savored clam chowder on (again) Cape Cod.

It’s why I like those funky purple potatoes that now grow abundantly in Maine (I first tried them in the Andes of Peru), and the taste of Hadley (MA) asparagus fresh picked from the field. And then there is French Onion soup dressed with fresh apples, or sea scallops on the pier in Monterey Bay (CA). Or chunks of cheddar cheese cut off huge aged rounds (at the Granville Country Store in the Berkshires) as I watch. 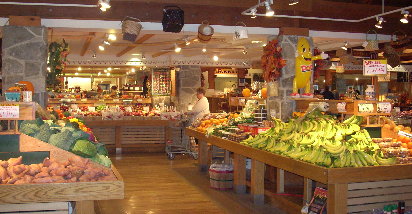 Besides grabbing some locally grown fresh fruit for the road, Atkins Fruit Farm also has home-baked goods such as warm Apple Cider Donuts, pure Maple Syrup, and a selection of goodies from regional farms. (Photo by Christine Anne Piesyk.

Loca’Vore (commonly spelled “localvore”) is the Oxford University word of the year, a term coined in San Francisco that defines a commitment to consuming only foods grown within a hundred miles radius. Now that easier to achieve in some parts of the country than others, but where there is an abundance of local produce (including jams, jellies, breads, cheeses, meats) it is a also a strategy for supporting local growers and farmers in a local economy. The products used are always unique to the region. It’s what I look for wherever and whenever I travel. Long trips, regional trips, or just ambling around town.

As for chain hotels and motels, they assure a fairly certain standard of comfort, and for those who need that kind of security or standardization, by all means be their guest…but checking into Red Roof Inn is not half as much fun as walking through a small Canadian village pool hall, paying ten dollars for a third floor walk up room (upstairs from that French-speaking pool hall/country store/post office/feed store) — a fine old room with a bath down the hall, latched but not locked doors, handmade rag rugs, feather quilts and pillows on a an old iron bed and a view of the St. Lawrence River from my window. It is not the same as finding that little cluster of cottages with a lake view to the east and a mountain view to the west and home-cooked community meals with fellow fishermen on the great lakes. It’s not as good an seaside inn on the California coast. Or a rooming house in old Quebec City. Or any small locally owned motel or bed and breakfast.

Along America’s highways, the view is increasingly the same: Motel 6, Red Roof Inn, Hometown Suites, Holiday Inn (not from the Bing Crosby musical), Hyatt, … you get the idea. Get out that rubber stamp.

I see these cloned hotels, malls and eateries as dots on the corporate maps, bottom lines on the corporate profit statements, a push toward standardization that saps individuality from the highways and main streets of America communities, funneling the competition of small business into oblivion. 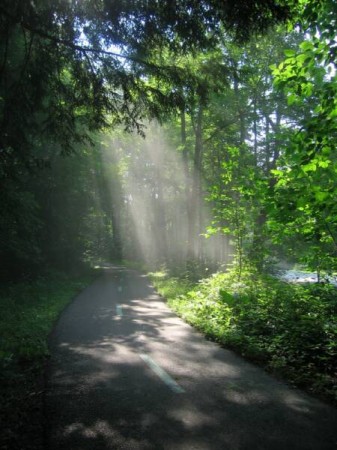 These cloned corporate chains, this connectedness to technology, this fierce need to be bigger, faster, better, and perpetually linked are ties that bind us to work and home, precluding the kind of getaways in which we really “get away.” It isolates us, and keeps us from experiencing something new. Something different. It keeps us from knowing ourselves, and getting to know the people in other parts of our world.

As I move about the country, I become increasingly determined (moving quickly into adamant) to skip the mainstream, refuse the redundant, and seek out those places and people I don’t know yet … but want to meet. I want to slow down long enough to experience the heritage, the local color and culture,the values, the texture and taste of community. No spoon-fed culture, thanks. I like that “road less traveled.”

We cannot and probably should not always retain or re-create yesterday’s atmosphere exactly as it was. We can take the best of our history, or traditions, our cultural quirks and with careful planning redefine them in a way that anchors us to our heritage and history while moving us forward. That heritage is what gives our cities and towns solidity, and a “destination”stamp that actually means something.