Led by senior Chelsea Harris’ 74, the Lady Govs fired a final-round 312 for a two-day 620, to finish in fourth place in the event. In fact, the Lady Govs, who were in fifth place three strokes behind Belmont after Monday’s round, flew past the Bruins, who ended up in fifth place at 630.

“We were really playing well today until the rain delay,” APSU coach Sara Robson. “I think we were about the only six (golfers) who wanted to go back out after the rain delay. We began the day with a delay and then we played 9 to 11 holes; then we stopped for almost two hours.

“Considering everything I think the girls handled the adversity pretty well.” 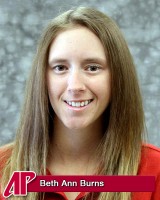 The 620 served as the Lady Govs best score this fall, with Monday’s 308 the second best round.

“We wanted to finish the fall season strong,” Robson said. “With the conditions and everything, I really think we did. We played real well much of the day.”