Khowst Province, Afghanistan – A color guard of Soldiers from Company B, 404th Civil Affairs Battalion raised a flag up the flagpole at Forward Operating Base Salerno in Afghanistan January 24st.

It’s an act performed everyday by U.S. Soldiers across Afghanistan and, indeed, across the world.

This flag, however, is different. It’s one that has flown at Ground Zero in New York City after 9/11 and holds special meaning to the 404th Soldiers, based out of Fort Dix, NJ, many of whom are from the New Jersey and New York areas.

The flag has been traveling around Regional Command – East, visiting FOBs while in the care of U.S. Army Command Sgt. Maj. Michelle Fournier of New York City, 404th Civil Affairs Bn., who has been the keeper of those colors since March 1st, 2010.

The flag will be returned to Ground Zero in July and put on display at the Ground Zero Museum. Certificates of Freedom from each group the flag visited will be inducted into the museum along with the flag.

“The flag is symbolic of America and the strength of Americans,” Fournier said.

For many of the Soldiers in the 404th, the flag represents a day that has been burned into their memory. U.S. Army Maj. Paul Ferreira, commander of Company B, 404th and a resident of New York City, grew up in the shadow of the World Trade Center. He said he watched it fall September 11th, and lost friends when it came down. 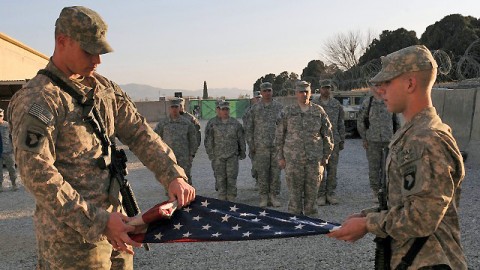 Ferreira said this was the first time he’d seen the WTC flag raised while in Afghanistan. The flag held personal meaning for him, he added.

He wasn’t the only one who remembered where he was that day.

U.S. Army Lt. Col Teresa Wolfgang, 404th commander and a resident of New York City, said she was in Dallas when the planes hit. Her uncle worked in the Pentagon and had left work 40 minutes before the plane hit, destroying his office.

Wolfgang said being stewards of the flag is a great obligation for her battalion, and one undertaken with pride. They try to get the flag to as many FOBs as possible and are often greeted with gratitude by Soldiers who simply want to see the flag or take photos with it.

“It’s important for it to make the rounds because 9/11 is where it all started,” Wolfgang said. “We always have to remember how this started so we can continue forward.”