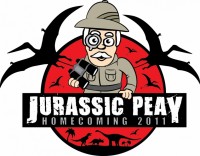 The Week started out with a homecoming concert in the Red Barn on campus featuring Big Sean with CyHi da Prynce, other events during Homecoming Week included a fight song competition, the APSU Apollo Talent show, A step-off competition, a pep rally, and the NPHC Step show.

The Homecoming Court was announced at the conclusion of the Step-off Competition on Thursday. The 2011 candidates for Homecoming King were Trent Gaasch, A.J. Hall, Alejandro Herrera, Kelvin Rutledge and Branden Ward; for queen were Kara Black, Cady Denton, Amanda Hoover, Laura Czecholinski and Ashley White.

At the Homecoming Game, the APSU Governor’s Football Team were unable to keep their first quarter lead going and they ended up losing to the Panthers 19-10.

During half time at the Homecoming Game AJ Hall was crowned King, and Ashley White Queen for 2011.

Austin Peay Football returns for its final home game at 1:00pm, Saturday when it plays host to Central State in a non-conference tilt at Governors Stadium.