HomeNewsClarksville Police arrest Two Men after they attempt to break into a...
News

When officers arrived, they found out that two men had came to the residence in an attempt to fight a 20 year old male that lived there. They tried to kick the back door in and were unsuccessful, so they went to the front door to try and make entry. 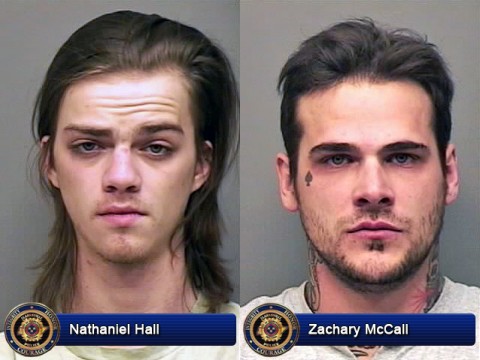 In the meantime, another 20 year old male inside of the residence retrieved a shotgun. After the intruders kicked in the door, they found themselves facing a shotgun and being ordered to leave the residence.

The two men fled from the scene in a blue Pontiac Sunfire. One of the men, known by one of the house’s occupants, was identified as Nathaniel Hall. The vehicle and description of both suspects was disseminated to officers in the area.

Officer Joshua Swaffer spotted the vehicle on the 41-A Bypass, relayed the direction of travel, and Officer Beau Skinner was able to stop the vehicle. Both suspects were positively identified as the men trying to force their way into the residence.