Tennessee Titans Back to Football 5k Registration going on now 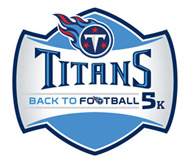 Nashville, TN – The goal line is normally the most desired destination at LP Field, but the home of the Titans will feature a finish line in August.

The Titans, Competitor Group and the city of Nashville have joined forces to offer the first Titans Back to Football 5K race on August 25th. The race will start near the stadium and conclude on the field two days after the Titans host the Arizona Cardinals in a preseason game.

Registration opened today at www.titansrun.com. The race route has not been finalized, and plans for a ‘Play 60’ half-mile fun run for youth are also forthcoming.

The cost for the 5K is $55.00 until June 24th. After that, the price increases incrementally as the race day approaches. The entry fee includes a ticket to one of three games: against Indianapolis Colts (October 28th), against Houston Texans (December 2nd) or against Jacksonville (December 30th), and a Nike tech running shirt. Participants can designate their preference of games during registration and have an opportunity to purchase additional tickets. A portion of the proceeds will go to charity.

Don MacLachlan, Titans executive vice president of administration and facilities, said the partnership makes “perfect sense” and will be a great way to celebrate the return of football season at LP Field, which is undergoing multiple renovations, including a new HD video board. Participants will appear on the new video board as they finish the race.

“We appreciate the partnership we have with the City and with the Competitor Group,” MacLachlan said. “We are looking forward to a wonderful event. It will be a great weekend for everyone.”

Sundlun said running provides an accessible way to exercise and the 5K distance, which is 3.1 miles, allows participants a gateway to the sport for people of all levels. He added that appearing on the video board, finishing on the playing surface and receiving a Titans ticket provide unique opportunities.

“This 5K is a great entry into the half marathons and the longer distances, and the feeling of accomplishment is just as great,” Sundlun said. “This partnership with the Tennessee Titans will unite both runners and football fans, and we look forward welcoming participants of all abilities as we kickoff the 2012 NFL season in August.”

Nashville Mayor Karl Dean, who has completed races of various lengths and encourages residents to exercise as often as possible, thanked the Titans for teaming with Nashville to host Field Day at LP Field in May and the upcoming race in August. Dean also complimented the job that Competitor Group does each year with the Country Music Marathon.

“The Tennessee Titans are a great asset in Nashville, and I know a Titans-branded race will call attention to the benefits of exercise and living healthier in a big way,” Dean said. “I’m also pleased to hear the Titans will designate a portion of the proceeds to a charitable cause. That is absolutely terrific.”