With the victory, Austin Peay (10-7-1, 6-2-1 OVC) reaches the 10-win plateau for the second time in school history, the first coming in the 2010 campaign that saw the Lady Govs reach the Ohio Valley Conference Tournament Championship game for the first time in school history. Morehead State (1-12-4, 1-5-3 OVC), picked to finish third in the OVC in the preseason, was shut out for the seventh time this season.

The Lady Govs notched the game-winner in the 20th minute, thanks to senior Emily Perkins. The Nashville native scored her season’s sixth goal on a through ball from junior Andy Quiceno to put the Lady Govs up 1-0. The goal moved Perkins past Erica Dengler (2003-06) and Kaylee Yago (2002-05) for fourth all-time in Austin Peay history with 13 goals.

Austin Peay was content to hold on to its lead from that point on, and concentrated its efforts defensively on shutting down the Eagles. Despite being outshot 15-5, Austin Peay limited Morehead State to just two shots on goal, both of which were saved by junior Haylee Shoaff for her season’s sixth shut out.. 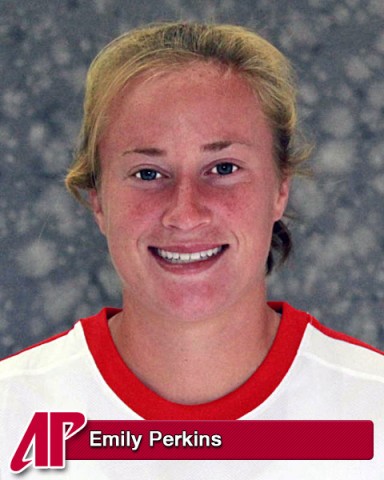 “Perkins scored a beautiful goal,” said head coach Kelley Guth. “Haylee was outstanding for us in the second half. Overall, we’re happy for the victory.”

The Lady Govs defense has been stellar down the stretch. Shoaff, the reigning OVC Goalkeeper of the Week, now has 41 saves in the last seven matches and the defense has been vital in turning six of those matches into shutouts.

The Lady Govs close out the regular season, 2:00pm, Sunday, with a battle against Eastern Kentucky at Morgan Brothers Soccer Field. With UT Martin’s 2-0 victory at Jacksonville State and the Colonels’ 1-0 win at Murray State, Friday, Austin Peay and Eastern Kentucky will do battle for second-place in the OVC standings and a first-round bye in next week’s Ohio Valley Conference Tournament.

“Sunday’s game will be a big match-up,” Guth said. “We want that first-round bye, and this will be a huge final test.”