Increasing intake of foods rich in dietary nitrate may be an affordable and attainable way to manage blood pressure, researchers said.

Dallas, TX – A cup of beetroot juice a day may help reduce your blood pressure, according to a small study in the American Heart Association journal Hypertension.

“Our hope is that increasing one’s intake of vegetables with a high dietary nitrate content, such as green leafy vegetables or beetroot, might be a lifestyle approach that one could easily employ to improve cardiovascular health,” said Amrita Ahluwalia, Ph.D., lead author of the study and a professor of vascular pharmacology at The Barts and The London Medical School in London.

The beetroot juice contained about 0.2g of dietary nitrate, levels one might find in a large bowl of lettuce or perhaps two beetroots. In the body the nitrate is converted to a chemical called nitrite and then to nitric oxide in the blood. Nitric oxide is a gas that widens blood vessels and aids blood flow. 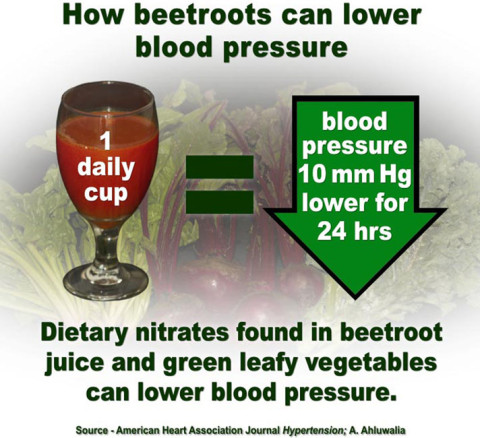 “We were surprised by how little nitrate was needed to see such a large effect,” Ahluwalia said. “This study shows that compared to individuals with healthy blood pressure much less nitrate is needed to produce the kinds of decreases in blood pressure that might provide clinical benefits in people who need to lower their blood pressure. However, we are still uncertain as to whether this effect is maintained in the long term.”

The study involved eight women and seven men who had a systolic blood pressure between 140 to 159 millimeters of mercury (mm Hg), did not have other medical complications and were not taking blood pressure medication. The study participants drank 250 mL of beetroot juice or water containing a low amount of nitrate, and had their blood pressure monitored over the next 24 hours.

Compared with the placebo group, participants drinking beetroot juice had reduced systolic and diastolic blood pressure — even after nitrite circulating in the blood had returned to their previous levels prior to drinking beetroot. The effect was most pronounced three to six hours after drinking the juice but still present even 24 hours later.

In the United States, more than 77 million adults have diagnosed high blood pressure, a major risk factor for heart diseases and stroke. Eating vegetables rich in dietary nitrate and other critical nutrients may be an accessible and inexpensive way to manage blood pressure, Ahluwalia said.

Getting people to eat more fruits and vegetables is challenging, but results of the study offer hope, she said. “In the U.K., the general public is told that they should be eating five portions of fruit or vegetables a day but this can be hard to do. Perhaps we should have a different approach to dietary advice. If one could eat just one (fruit or vegetable) a day, this is one more than nothing and should be viewed as positive.”

The USDA recommends filling half your plate with fruits and vegetables, and the American Heart Association recommends eating eight or more fruit and vegetable servings every day.

The American Heart Association has tips on adding more fruits and vegetables to your diet.