Identified is Staff Sgt. Thomas Allen Baysore Jr., 32, of Milton, PA. Baysore was killed by an enemy combatant wearing an Afghan National Army Uniform who opened fire on a group of Soldiers. He was struck on the left side of his neck.

Baysore was taken to taken to his post aid station where he succumbed to his wounds. 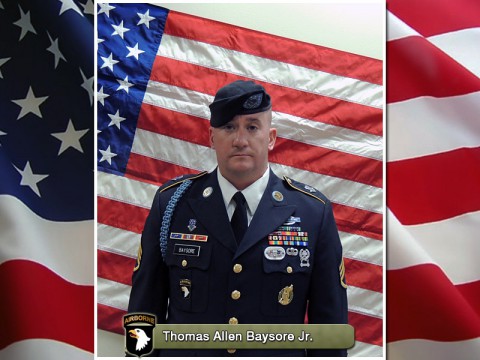 He joined the Army in June 2001 and was stationed at Camp Ederle, Italy, where he had a variety of assignments, including vehicle driver, rifleman, automatic rifleman, and fire team leader. He was also assigned to the Harrisburg Recruiting Battalion., in Harrisburg, PA, as a recruiter.

Following his assignment there, Baysore arrived at Fort Campbell, KY, in August 2010 and was assigned to the 4th Brigade Combat Team, 101st Airborne Division.  This was his third deployment to Afghanistan. He deployed once prior to arriving to Fort Campbell, KY, in 2005, and again with the Division in 2010. He also deployed to Iraq in March 2003.

A memorial ceremony will be conducted in Afghanistan.