Clarksville, TN – Sophomore Jessica Cathey and senior Rachel Deaton each posted a top-five finish but it wasn’t enough to move Austin Peay State University women’s golf team forward and it settled for a seventh-place finish at its own F&M Bank APSU Intercollegiate, Tuesday, at the Clarksville Country Club.

Cathey finished third in the individual race with a three-over par 147 total after posting a 76 during Tuesday’s round. Deaton finished tied for fourth, adding a 74 Tuesday to finished with a five-over par 149. 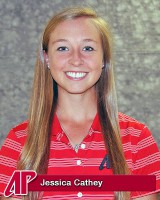 Still, it was the first time since 2002 multiple Austin Peay women’s golfers finished in the top five of its own tournament. The only other group to do so was the trio of Pier-Anne LaChance (3rd), Amanda Phillips (4th) and Lynn Mantooth (5th) which led the Lady Govs to the 2002 team title at what was then called the Precept Intercollegiate.

“We played much better as a team today,” said Robson. “We hit the ball a lot better, though I believe we putted better yesterday. I’m proud of the team for coming out and working hard today. Rachel and Jessica had a solid tournament, I’m proud of them. Individually, Kelsey played great and that was good to see.”

Cathey and Deaton were unable to pull the Lady Govs forward in the team race. The Lady Govs did post a 310, which was a four-shot improvement over Monday’s opening round, and finished the tournament with a 624. However, each of the teams in front of APSU also shot a better round on the tournament’s second day.

No team posted more of an improvement than Jacksonville State. The Gamecocks trailed Murray State by 18 shots entering the day but posted a tournament course record 293 and finished with a 607. That edged out the Racers who cooled off from yesterday’s 296 to card a 312 and saw their hopes for the title dashed after finishing with a 608, one shot behind JSU. Eastern Kentucky rounded out the top three with a 609 two-day total.

Austin Peay’s seventh-place finish put it at the tail end of a four-team grouping that started with fourth-place Belmont (617) followed by Houston Baptist (5th, 620) and Radford (6th, 620).

Austin Peay will have the upcoming week to prepare for its next outing – the Blue Raider Invitational hosted by Middle Tennessee, October 21st-22nd, at Old Fort Golf Course in Murfreesboro, TN.