Bagram Airfield, Afghanistan – The Afghan National Army (ANA) acquisitioned small arms ammunition from Coalition partners in the later part of August in Parwan province, Afghanistan. The transfer of ammunition was in response to a shortage in the southern regions of the country.

This is the first time the ANA has independently used the logistical process to acquire and distribute ammunition throughout their military formations. This action comes at a critical phase; as the country’s defense rests in the Afghan security forces ability to manage their force structure and logistically provide for those forces.

The partnership between the Coalition and ANA that allowed for this process and transfer to happen is another step to “strengthen our relationship with the Afghan government and the Afghan military,” said Arabian, a native of Warwick, R.I.

According to Canadian Army Maj. Matt Boire, a Ministry of Defense ammunition advisor and a member of the 2nd Battalion, Princess Patricia, Canadian Light Infantry, this type of forward progress for the ANA is a success. “We are actually seeing for the first time the Afghans come out to the FOB (forward operating base), picking it up, coordinating, doing the paperwork and then they are going to take it back and inventory it themselves. Afghan security forces are actually reaching out, connecting and taking ammo so they can continue their fight in the South.”

The ability to sustain a fighting force is critical for any military and is a priority of the Afghan security forces and their coalition partners.

“What people often do not realize is that the fighting echelon is only as strong as the logistic capability that supports it,” stated Boire, a native of Shilo, Manitoba, Canada. “If a soldier doesn’t have bullets and beans they aren’t really able to maintain the fight.”

The ability to acquire, process and deliver ammunition throughout the country of Afghanistan is pertinent in building the “capability and capacity to support their fighting forces and is going to be the make or break, especially with the withdrawal of the combat forces, Boire stated.

“That’s why it’s such a success. It’s not American, Canadian or coalition forces, this is Afghans taking control and maintaining security of their own country.”

During the ammunition draw from the ammunition supply point at Bagram Airfield, Shama accounted for every bundle of ammunition and his troops loaded each bundle onto their trucks. The forms he reviewed were in the Dari language and the presence of translators for communication made the process seamless. 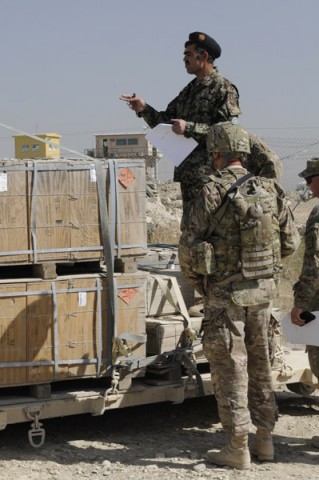 Through a translator, Shama explained the process for him and the challenges the Afghan National Army faces with minimal stock of ammunition. He stated “the numbers (of ammunition) were very limited and because of today we will be able to transfer to different parts of Afghanistan so it’s very vital.”

He added, “In the last two months the help (partnership between coalition and ANA) has been so overwhelmingly well that we were able to transfer everything that we needed to different parts of Afghanistan.”

Shama, and his troops ensured all documentation was processed meticulously with the ammunition supply point’s accountable officer, Arabian, prior to transferring the ammunition.

“It’s important, a first of its kind and historical,” Arabian commented as they began to load the Afghan trucks. “It’s definitely going to help them fight the war, with us stepping back and downsizing our footprint in Afghanistan.” 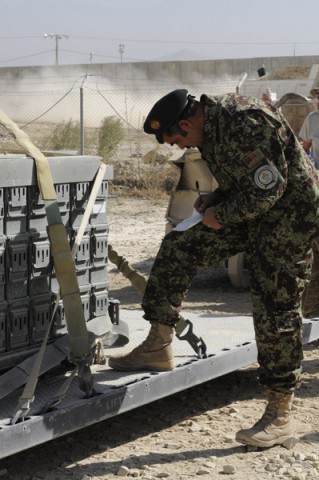 For Boire, as a mentor and partner with the 22 Bunkers, to understand the capability to build an autonomous organization that allows the ANA to self-sustain, means there won’t be a need to have as many boots on the ground and over-watch.

“The things that we see today just show us that those communications lines are actually working and also, that they are effective,” he explained. “Some may say why are we handing off this ammo? The big thing to realize is this is the Afghan fight right now in the South and the Afghans need this ammo to continue the fighting.”

Boire continued to explain the realization from the way he sees the process, “handing over some ammo that’s going to be used by the Afghans to secure their own country is far less expensive then it would be if we (Coalition) go out and use them in a full spectrum operations. I think that the cost really pales in comparison to what could be.”