The loss was the third straight for the Governors, who fell to 5-8 on the season. East Tennessee, meanwhile, swept the two-game season series with the Govs while improving to 6-6, winning those six games in its last eight contests.

Sophomore guard Corey Arentsen nailed a right-wing three pointer with 5:06 left to give APSU a 77-70 lead, It would not only be the Govs last bucket but as well the final points until Chris Horton stuffed one in at the buzzer.

Until the Horton basket, the Govs missed nine straight shots in the final 4:17 while ETSU attacked a tiring Govs defense at the rim. A.J. Merriweather got it started by rebounding a Buc miss and sticking it back in. Then Rashawn Rembert scored on a conventional three-point play after driving to the basket.

Jalen Riley then hit a pair of free throws with 2:12 left that tied the game at 77 before driving and dishing to Kinard Gadsen-Gilliard for a layup with 1:31 left to give back East Tennessee the lead it relinquished with 7:10 left in the first half.

In fact, ETSU got off to a 12-0 lead before a resilient Govs team rallied to tie the game at 16. After a short East Tennessee surge, the Govs, led by sophomore guard Cory Arentsen closed the half on a 30-14 spurt to own a 50-37 lead at intermission. 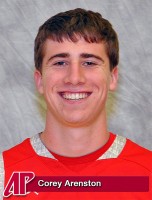 Arentsen, who had struggled during the season’s first half, knocked down all six first-half three pointers attempted to provide the boost APSU was seeking.

But the Govs season-long problem—turnovers—again came back to haunted them. The Govs committed 20 turnovers, the second straight game with at least that number.

Still leading by 11, 64-53, with 12 minutes left, APSU committed two straight backcourt turnovers that led to a pair of ETSU three pointers. Cutting their deficit to five points in a matter of one minute was all the Bucs needed to continue their comeback.

A conventional three-point play by Horton and later a Horton layup temporarily stemmed the onslaught. But the Govs could not find any answers downed the stretch after the Arentsen three pointer.

Arentsen finished the night with a career-high 21 points, going 7-of-10 from three-point range. Horton led all scorers with 23 points, matching his career high. A third sophomore, Serigne Mboup, ended with a career-best 10 points. Excluding Horton, reserves Arentsen and Mboup combined to outscore the remaining Govs.