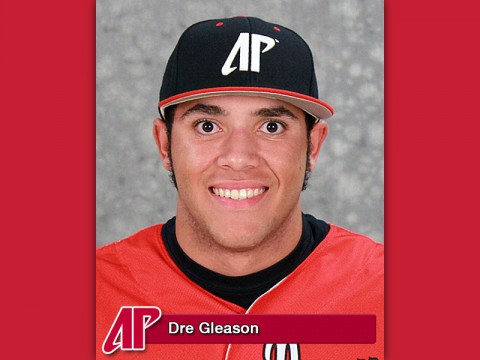 He began the week with a 2-for-3, three-RBI performance against Memphis, Wednesday, including a two-run single in the eighth that supplied the game-winning runs.

In the Govs’ Ohio Valley Conference series against Southeast Missouri, Gleason finished with six hits and five RBI in three games. He was 3-for-6 with a home run and three RBI in APSU’s series-opening victory. Gleason went 2-for-4 with a solo home run in the series’ second game. He wrapped the series with a 1-for-2, one RBI effort that included a double. Gleason had three of the Govs six extra-base hits in the series.

It is the second time this season Austin Peay has had a Player of the Week selection by the TSWA. Freshman Ridge Smith earned the honor after the season’s first weekend.

Austin Peay returns to action when it begins a four-game, four-day road trip with a 4:30pm, Wednesday contest at Southern Illinois. The Govs then face Belmont in a three-game OVC series, beginning Thursday in Nashville, TN.