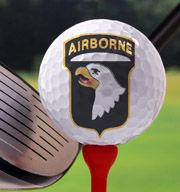 Clarksville, TN – Being the only player to post two under-par rounds, June 14th and 15th at Cole Park Golf Course, Brian Balthrop recorded his second Commanding General’s Golf Tournament win in the past three years with a one-shot victory.

“I just tried to go bogey free,” Balthrop said. “Bogies early in the second round really hamper the momentum you have going in.

“I got off to a quick start (starting on the back nine holes) with a birdie on 12 and 14 – having advantage of both par fives – and was able to turn at two-under.”

This weekend’s finish was a much better result for Balthrop, who opened the Clarksville Golf Association season at the Wendy’s with a fourth-place finish.

“I was kind of struggling at the Wendy’s scoring,” he said. “I came into this weekend concentrating on the par fives to see if I could get under par early.

“Yesterday I played well; I just didn’t make as many putts, today I just tried to manage the par fives, hit a lot of fairways and greens and tried to keep myself out of trouble.”

In the Senior Division, Brad Van Kirk rallied from five shots down, by posting the low round of the day – in either division — to win his third straight Commanding General’s, with a two-day total of nine-under 135 (69-66).

“This is my third straight (Commanding General’s) win and I’m speechless,” Van Kirk said.  “I thought I was out of it after the first day being five (shots) back, but I just went out today and played my heart out and it worked out.

“I felt coming out today I was going to have to shoot a 65 to have a chance. I made one bogey on my 16th hole and wound up shooting a 66 and it just happened to be good enough. The chips just kind of feel my way today.”