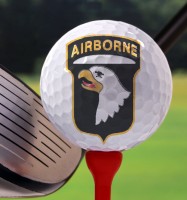 Clarksville, TN – Josh Black shot an opening round of four-under 68, June 14th at Cole Park Golf Course, to lead the Champion Flight of the Open Division at the Commanding General’s Golf Tournament by two shots.

Black was one of four golfers to break par in the Open Division, which includes Jim Mashburn at 2-under 70 and defending champion Jeff Chandler at 1-under 71 – matched by Brian Balthrop.

Wendy’s champion Tyler Phillips is four shots back after an even-par round of 72, with Colin Welker, Drew Miller, Jonathan Shuskey at coming at a 1-over 73 – with five other golfers at 2-over 74.

In the Open Division First Flight, there is a logjam at the top with David Sheron Sr., Lafran Marks, Todd Dalton, Todd Morris and Weston Sartain at tied after 18 holes of play with rounds of 6-over 78.

Overall in the flight, only five shots separate the first- and last-place scores.

Justin Nachtweih and Carlos Rubert are just a shot back after opening with 79’s, while three golfers Brigg Deering, Charlie Koon, Tyler Britt are two shots back.

In the Open Division Second Flight, Ryan Campbell, Nathan Clark and Barry Cunningham are tied for the top spot with opening-rounds of 85, while Sunny Mitchell, Scott Thigpen and Johnathan Sewell are just a shot back with 86’s. Colby Krug is two shots behind after carding a round of 87.

In the Senior Division Championship Flight, Joe Hodge turned in the round of the day with a sparkling round of 8-under 64, which is five shots better than a group of four golfers tied at 3-under 69 – including defending Commanding General’s Senior Champion Brad van Kirk.

Tommy Shearon was the only other golfer in the Senior Division in red numbers with a round of 1-under 71, while Joey Long and Ray Johnson fired even-par round of 72.

The Senior Division First Flight has four golfers Bobby Bracy, David Graham, James Clark and Ted Purdom tied atop the flight at 6-over 78, with Bill Wilkinson, David Ross and Richard Collier just a shot back.

Jeff Campeau, Ronnie Seay, Ted Crozier, Rickey Briskey are just two shots back, with opening-round 80’s, while five others sit at 9-over 81.

In the Senior Division Second Flight, Harold Gabhart and Jack Smith lead John Sprake and Scott Lewis by a shot after opening with rounds of 84, while Dickie Seay, Rod Lowell and Skip Cook are just two shots back.

The tournament concludes June 15th, with the Senior Division opening the tee times; beginning at 7:00a.m., while the final group of the Open Division tees off at 1:00p.m.