Oxford, MS – Austin Peay State University men’s basketball team will have one last chance to secure a road victory before Ohio Valley Conference play begins, but to accomplish that feat the Govs will have to do it against one of the surprise teams of the Southeastern Conference so far this season. 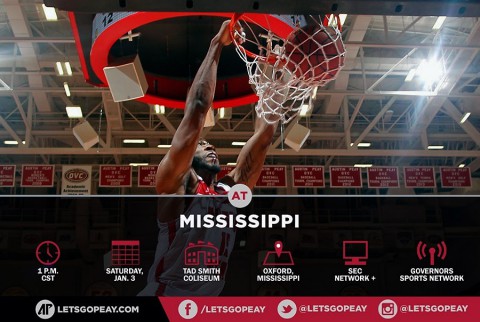 With the Marshall Henderson Era ending creating a multitude of new faces the Rebels got off to a bit of a slow start in 2014-15, losing to Charleston Southern in the opener. But they have steadily improved since the stunning opener.

In fact, in going 8-4 under ninth-year coach Andy Kennedy, they have impressive neutral site victories against Creighton and Cincinnati and a road victory at Oregon. Prior to Christmas the Rebels manhandled Southeast Missouri, 84-51. However, they are coming off a road defeat at Dayton, 78-74, Tuesday.

Ole Miss is led by first-year junior guard Stefan Moody, who is averaging 13.9 points per game while senior guards LaDarius White and Jarvis Summers come in at 12.8.  The Rebels also have a pair of former OVC players on their roster.

Center/forward M.J. Rhett, who was undervalued a year ago at Tennessee State, is averaging 6.5 points and 5.3 rebounds per game as a sometime starter. Meanwhile, Terence Smith, formerly the starting UT Martin point guard, is averaging 3.5 points per game off the bench.

Although Ole Miss shooting only 43 percent from the floor, the Governors will be wise to keep the Rebels off the free-throw line—they entered the week leading the nation in free-throw shooting (78.5 percent).

APSU enters the contest following an impressive come-from-behind 65-60 win against North Florida. The Governors overcame an eight-point second-half deficit and ended the game by outscoring the Ospreys 19-7 over the final 8:17.

The Govs limited North Florida to just 31 percent (9 of 29) shooting in the second half, including 0-of-11 from three-point range. That was after the Ospreys lit up the Govs for seven first-half three pointers.

APSU’s comeback against the Ospreys was a result of an intensified effort to get the ball inside. Chris Freeman scored 15 second-half points en route to a career-high 23 points—Freeman finished the game 10-of-15 from the floor.

The Govs received a lift down the stretch from junior point guard Zavion Williams, who played the final 12 minutes after missing the previous four games with a leg injury.

The Governors are 0-4 all-time against the Rebels, with all previous meetings on the road. This is scheduled to be the final year for Tad Smith Coliseum, which opened in 1966.

The Series: This is the fifth meeting between Austin Peay, a member of the Ohio Valley Conference, and Ole Miss, a Southeastern Conference member. All four previous games have been in Oxford. The Govs are still seeking their first series win.

What A Loss Would Mean: The Govs would enter OVC play with a 5-9 overall record… they would open 2015 with a defeat…it would leave the Govs 0-7 on the road…it would make the Govs 0-5 all-time against Ole Miss…Loos would fall to 0-4 against the Rebels…Loos would drop to 470-413 overall and 388-360 as the Governors head coach.