The Lady Govs will look to start their second season on a positive note, but will have to do so against one of the OVC’s top defensive teams. 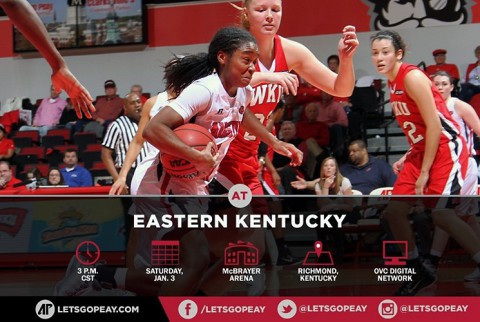 The Colonels allowed their nonconference opponents to score just 61.1 points per game, a mark that was second-best in the league.

The turning of the calendar year also will give Austin Peay an opportunity to leave a 3-10 nonconference record behind. The Lady Govs ended the 2014 calendar year with a 63-54 loss at Central Arkansas, December 30th, it’s lowest offensive output of the campaign.

Freshman Brianne Alexander impressed in her APSU debut, scoring 13 points and grabbing five rebounds in 17 minutes off the bench.

Gray also became just the 10th Division I player to record a triple-double this season, notching the feat against Saint Louis, November 19th.

Eastern Kentucky returns to action after a 12-day break, dropping a 70-56 decision to Richmond, December 21st, in its last outing prior to the holiday. Junior guard Shameekia Murray scored 16 points off the bench in that loss and is second on the team with 10.5 points per game.

A late surge almost pushed Austin Peay State University women’s basketball team past Eastern Kentucky, but the Lady Govs were unable to get over the hump against the Colonels, falling 79-71 on Senior Night.

With both squads engulfed in poor shooting nights, ball control was at a premium and in that, Austin Peay was undone.

Eastern Kentucky’s Marie Carpenter, the second-leading scorer in the OVC entering the game, finished with a game-high 29 points, while Michaela Hunter scored added 20 for the Colonels.

Austin Peay’s OVC opening-stretch doesn’t get any easier as it travels to red-hot Jacksonville State for a 5:30pm (CT), Thursday contest. The Gamecocks ended nonconference play with the OVC’s only winning mark, posting a 8-3 record.

That mark included a win at Alabama that started a six-game win streak.