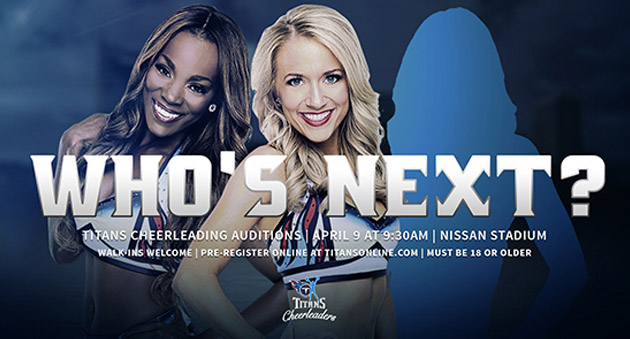 “I’m eagerly anticipating this season’s tryouts because we have the opportunity to add more vibrant women to our talented squad,” Kinder said. “Being a Titans cheerleader is more than just supporting the team from the sidelines. Our women have experienced many national and international opportunities from traveling overseas to visit the U.S. troops to being featured on national television, including numerous awards shows, the Bravo! Network, The Oprah Show and Dr. Oz.” 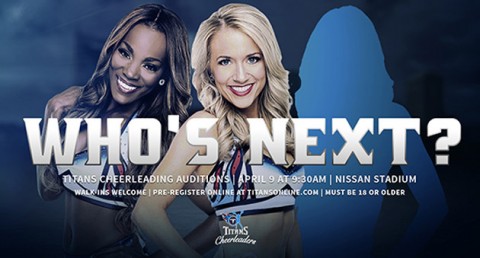 “They’ve had their own reality show on MTV, and their photos have been featured in various national publications. They’ve also danced in music videos and worked on the hit TV series, Nashville. The entertainment opportunities as a TTC are endless,” stated Kinder.

Titans Cheerleaders travel all over the country and internationally each year to visit our nation’s troops. The ladies have been as far as Korea, Kuwait, Singapore, and Africa and danced in the Caribbean Islands, Hawaii, Guam, and Alaska. They’ve spent a full week in Mexico City and worked at events in Las Vegas, Seattle, and Arizona, among others. The squad is also instrumental locally, appearing at over 200 events in Middle Tennessee annually.

This year’s audition process begins on Sunday, April 3rd with two pre-audition clinics at Boost Fit Club. At the event, participants will be able to learn limited choreography directly from Kinder prior to the auditions. It is mandatory that applicants pre-register for this event as space is limited.

All ladies must be 18 or older and be a high school graduate to be eligible for the 27-member squad. Candidates should wear comfortable, athletic clothing and be prepared to learn a short dance and perform it in front of a panel of judges. Walkup contestants are welcomed at the audition on the 9th. There is a $20.00 audition fee for pre-registered participants and $25.00 charge at the door.