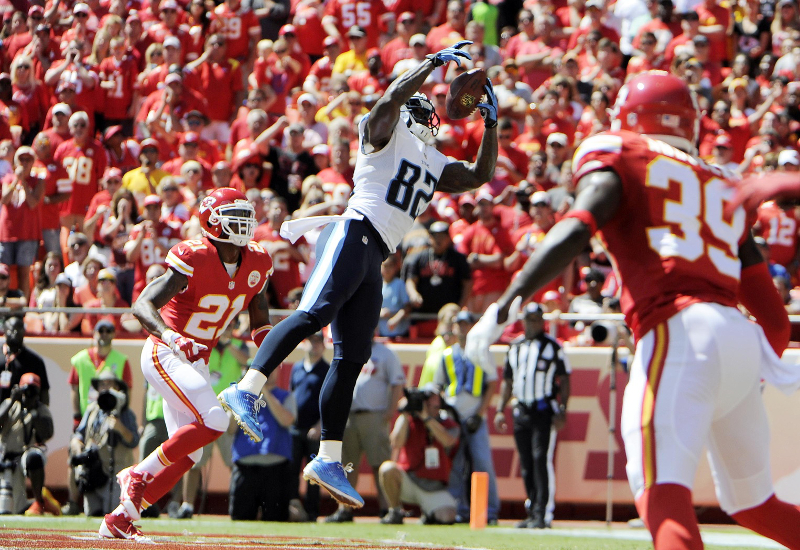 On defense, the Titans limited the Chiefs to one third-down conversion on 12 attempts, and they stymied Kansas City’s rushing attack. Chiefs Pro Bowl running back Jamaal Charles carried seven times for 19 yards.

Meanwhile, Tennessee used a committee running back approach with success. Four running backs had 23 or more rushing yards for the Titans, including a game-high 71 yards on the ground by Shonn Greene. The team totaled 162 rushing yards, which helped it control the ball for more than 37 minutes.

The game was scoreless through the first quarter. Then, early in the second quarter, the Chiefs took a 3-0 lead. After driving 64 yards, Cairo Santos got a favorable bounce off the right upright on a 35-yard field goal.

It would be their last score until less than 11 minutes remained in the game.

On Kansas City’s next drive, Alex Smith connected on a 27-yard pass to tight end Travis Kelce. The play led to a 48-yard attempt by Santos, who proceeded to drive the kick into the left upright. This time, it bounced away in favor of the Titans.

On the ensuing possession for the Titans, they finally got on the scoreboard. On an 11-play, 62-yard drive, running back Leon Washington snared a pass for eight yards to convert a third down. Then, Locker found tight end Delanie Walker for a 17-yard gain, and four plays later, the duo put the Titans ahead with a five-yard touchdown.

The first Titans takeaway led to more points late in the half. With the Chiefs backed up at their two-yard line after a punt by Brett Kern, Smith attempted a deep pass to Donnie Avery, only to have it intercepted by cornerback Jason McCourty. With three seconds remaining in the half, Succop made a 36-yarder.

The Titans began the second half with a 39-yard pass from Locker to Justin Hunter. Eight plays later, facing third-and-two at the six-yard line, Locker threw to wide receiver Kendall Wright, who stretched at the right front pylon for a touchdown to provide a 17-3 lead.

After McCourty’s second interception of the game, Locker directed his first of three consecutive drives for a field goal. Succop’s 31-yarder put the Titans ahead 20-3 with 2:46 on the clock in the third quarter.

Then, after the Chiefs were stymied by the Titans defense on a fake punt, Succop was good from 46 yards.

The Chiefs finally cut into the lead with a five-yard touchdown pass from Smith to tight end Anthony Fasano with 12:39 remaining in the fourth quarter. But it would be all the Chiefs could muster, and Succop’s final kick—this time from 47 yards—inside the game’s final five minutes provided the final 16-point cushion.

The Titans netted 405 offensive yards in victory while limiting the Chiefs to 245. Locker completed 22 passes on 33 attempts for 266 yards without throwing an interception.