The event provided firefighter training to approximately 50 participants from approximately 20 fire departments and involved 30 volunteer instructors. Personnel from seven states were at the training.

Dave Brasells, president of the Middle Tennessee Fraternal Order of Leatherheads Society, served as incident commander and he said the training was modeled after the Illinois Fire College Urbana-Champaign.

Both Brasells and Donnie Plaster, assistant chief of training for Fort Campbell FES, said this year’s training was an improvement over last year. In addition to the Fort Campbell facilities, the Middle Tennessee FOOLS provided a vertical ventilation station.

“We’re trying to give basic fire skill training under live fire condition to these firefighters, who otherwise don’t get to vent a roof, because you can’t get a structure that you can just cut up, or they don’t get to throw ladders that much and get up on a ladder and get up on a roof or go through a window,” Brasells said.

“One thing that was different between this one and last year, we had more of the scenarios outside, which uncluttered the building inside, so you didn’t have as many of the students stepping over top of one another,” Plaster said. “By bringing in the ventilation trainer, through the FOOLS it put a scenario on the outside and freed up the building and made things flow a lot better.”

Another change was the way the firefighters generated smoke. Thick smoke clouded the area around the Fire Training Facility. Instructors also kept large fires going in barrels, which helped them keep the conditions as realistic as possible.

“One of the things we learned last year was having five scenarios inside the building was too crowded so we pulled one out this year so there are only four in the building,” Brasells said. “So the conditions are much better this year. They are saying its smokier, it’s darker, they can’t see and we’re not having to work as hard to keep that smoke going, so we’re not having the delay between evolutions so we’re being able to go, go go.”

Firefighters would climb up a ladder in their full gear onto a mobile training station. They would make their way across its roof, using their tools to sound the roof, basically a hard tap to check for weak spots. Finally, the firefighters used a chainsaw in the vertical ventilation training to open a hole in the roof in iteration after iteration. Thick smoke would engulf the firefighters as they performed the training.

“The smoke that was rolling out of it and zero visibility that’s exactly what you’re going to get,” Plaster said. “It was about as realistic that you can get without flames coming out on you. They were breathing air [through their equipment] everything, just like you’d do in a real emergency.”

The training was also a good chance for teams of firefighters to practice working together. Phillip Peterson, deputy chief of the Pembroke Volunteer Fire Department and Staff Sgt. Jordan Gomez, the noncommissioned officer in charge of the 550th Engineer Detachment, 716th Military Police Battalion, supported at Fort Campbell by the 101st Airborne Division Sustainment Brigade, 101st Airborne Division, said it was a great training opportunity.

“It’s great for us as volunteers to be able to come into a live setting with real fire, real smoke, real heat and be able to go in a controlled atmosphere to learn and be able to discuss when we come out what we did and what we would do different next time, so that in a real situation we’ve already thought about what we’re going to do and how we’re going to do it,” Phillips said. “We have some training for state that comes through and does some of it but as far as all of it being in one place with all of these different scenarios in one day is just great.” 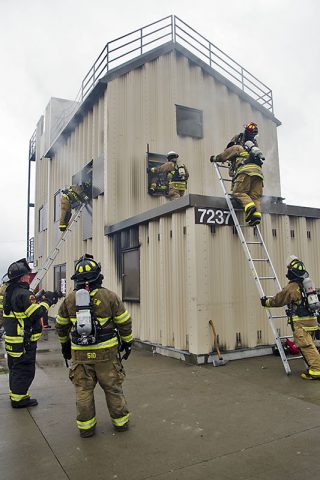 “I think it’s an amazing thing we have going on here. Not only for all the fire departments here, but for us Soldiers as well,” Gomez said. “It actually helps our Soldiers to be more proficient in their job and to learn new tasks new ideas and techniques on how to fight fires and to use the tools.”

The Light and Fight is all about providing opportunities to use skills that firefighters need in real world emergencies, but normally do not have many opportunities to train for. The chance to practice these skills could save lives in the future. Volunteer instructors demonstrated techniques which made the fire fighters more proficient.

Firefighters learned for example that the adze end of a Halligan bar can provide a 15-1 mechanical advantage, which helps firefighters break through doors faster and more efficiently in an emergency.

“Forcible entry is one of the techniques we don’t get a lot of time on and learning how to use those tools a lot,” Gomez said. “We’re learning a little more on vertical ventilation. You don’t ever get a lot of hands on with that. So we’re getting very challenging hands on and it’s going to keep that knowledge up and keep it fresh whenever we have to fight the real thing.”

All of the scenarios were going concurrently at the training and instructors kept downtime between scenarios to a minimum. Teams would repeatedly perform the training task. The repetition helped to build participants knowledge of firefighting skills.

“It’s always hard in training to replicate what you actually see in a real world fire,” Brasells said

“So as close as we can get it is the best. The more we can limit their visual ability, the more it relies on their skill set and their mental capacity. Firefighting is a mental job. A lot of people think it is very physical, and it is physical job, but our most important tool on the fire ground is our mind.”

For next year’s event plans are underway for adding two new scenarios.

“One of which being a car fire or a fuel spill fire on top of everything else and we’re looking at doing hose advancement training,” Plaster said. “How to manage hose placement and we’re going to set that up by building an obstacle course outside with pallets, with different angles, that when you pull your hose you’ll have to have really good hose management or you are going to get all hung up.”

The event was a success because it was a public private partnership between all of the participating organization, Fort Campbell and sponsors who enabled the event to be free for participants Brasells said.

“Fort Campbell has been great to us,” Phillips said. “We’re from Pembroke so we’re like [16] miles from here. We interact on some real calls also, they are a mutual aid force, but it is really great to see how different departments do different things.”