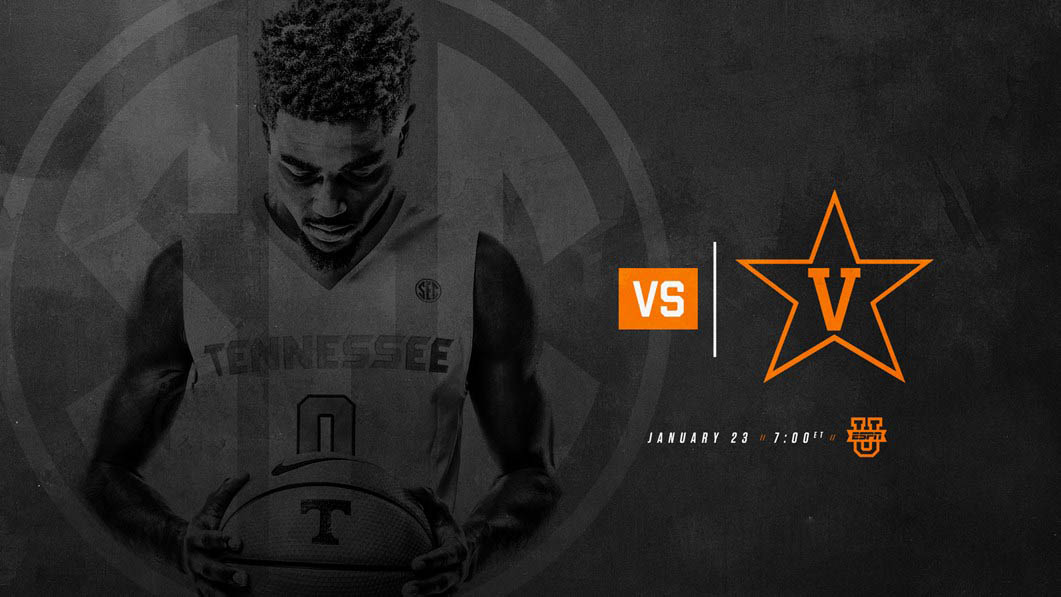 Knoxville, TN – No. 22 Tennessee returns home after a two-game road trip for a matchup with in-state rival Vanderbilt at Thompson-Boling Arena on Tuesday night. The game will tip at 6:00pm CT and will be televised live on ESPNU and streamed online via WatchESPN.

The Vols (13-5, 4-3 SEC) are coming off a road win at South Carolina, in which Lamonté Turner dropped a career-high-tying 25 points on 6-of-9 shooting from the field and converted on all 10 attempts from the charity stripe. He now has three of the four highest scoring efforts by the Vols this season, all while coming off the bench. 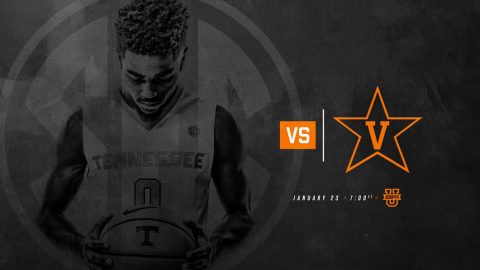 Grant Williams will look to repeat his success against the Commodores from the first game this season, when he posted a career-high 37 points to help UT overcome a 10-point halftime deficit in Memorial Gymnasium and earn a victory on the road. In SEC play, Williams is the third-leading scorer in the conference, averaging 18.1 ppg.

After losing four SEC games in a row, Vanderbilt (7-12, 2-5 SEC) found the win column this past Saturday, defeating LSU at home behind a 26-point performance from senior guard Riley LaChance. The Commodores are 0-5 on the road this season but have won the last three matchups in Knoxville against the Vols.

After Tuesday night’s contest, UT heads to Ames, Iowa, to face Iowa State as part of the Big 12/SEC Challenge on January 27th at 3:00pm CT on ESPNU. Tennessee prepares for a two-game home stand against LSU (January 31st at 5:30pm CT) and Ole Miss (February 3rd at 5:00pm CT).

Tennessee’s 119 wins over Vanderbilt are its most over any opponent. The Vols are rated No. 12 in the NCAA RPI and own the nation’s top-rated SOS, per KenPom.com

Despite surrendering a 16-point lead, VU was able to defeat the Tigers behind a 26-point performance from senior guard Riley LaChance, while senior forward Jeff Roberson chipped in an additional 20 points.

The Commodores are 0-5 on the road this season, losing by an average of 11.4 ppg in those contests. However, Vanderbilt has won the last three matchups in Knoxville against the Vols.

Vanderbilt is paced by Roberson, who leads the team in scoring (15.1 ppg) and rebounding (7.4 rpg). Matthew Fisher-Davis has been the team’s second best scorer, posting 11.9 ppg and 5.1 rpg, but the senior hasn’t played the last two games.

LaChance and freshman guard Saben Lee round out VU’s primary scoring attack, averaging 11.4 and 11.0 ppg, respectively. Both players shoot better than 45 percent from the floor on the season and are crucial in running the offense, as they combine for 51 percent of the team’s assist this season. Lee leads the Commodores with 3.4 apg.

A career night by Grant Williams lifted the 24th-ranked Tennessee Volunteers to a 92-84 victory over in-state rival Vanderbilt at Memorial Gymnasium on January 9th, 2018.

Williams finished with a career-high 37 points on 12-of-20 shooting from the field to go along with seven rebounds, three blocks and a pair of assists.

Admiral Schofield posted his second straight 20-point performance, tying his career-high with 22 points to go with a game-high nine rebounds.

Tennessee sophomore Jordan Bowden scored all 12 of his points in the second half.

UT’s 92 points in Memorial Gym was the most ever scored by a Tennessee squad, assisted by 40 points in the paint to match Vanderbilt’s hot shooting from beyond the arc.

After that, it was all Tennessee, as the Vols outscored the Commodores 57-39 in the second half to earn the road win. UT shot 57 percent (30-of-53) from the field to fuel its second double-digit comeback win away from home this season (other vs. Purdue).

Despite a strong start by Tennessee, Vanderbilt was dialed in during the first half, connecting on 59 percent (17-of-29) of its shots from the field. The Commodores knocked down eight threes, including one at the buzzer to make it a 45-35 game at intermission.

The Dores were paced by freshman guard Saben Lee, who posted 21 points on 7-of-10 shooting in 32 minutes of action.

Josh Richardson (now a season-long starter with the Miami Heat) helped the Vols rally from two separate double-digit deficits in the second half by scoring 15 of his game-high 22 points in the final stanza to lift Tennessee to a 67-61 comeback win over Vanderbilt in the 2015 SEC Tournament in Nashville on March 12th, 2015. In what was the second-to-last game of his career, Richardson also led all players with three steals and was a perfect 6-for-6 from the free-throw line.

Sophomore point guard Jordan Bone—a Nashville native and graduate of The Ensworth School—averages 11.0 points and 3.0 assists with a +3.0 assist/turnover ratio in three career games vs. the Commodores. Bone shoots .571 overall (12-21) and .667 from 3-point range (6-9) against Vanderbilt.

Sophomore forward Grant Williams scored a career-high 37 points while leading Tennessee to a 92-84 win at Vanderbilt on Jan. 9. He earned SEC Player of the Week honors for the first time in his career as a result.

All five teams who have defeated Tennessee this season occupy a top-40 spot in the latest NCAA RPI, and three of those teams— Villanova (2), North Carolina (3) and Auburn (8)—own a top-10 RPI.

Those five teams, which also include Arkansas and Missouri, own a combined record of 77-19 (.802)

[320rihgt]That win started a streak of stellar play for Schofield. Over the last five contests, Schofield is averaging 15.4 points, 7.0 rebounds, 2.2 assists and 2.2 steals per game.

Schofield also has scored in double figures and made multiple 3-pointers in each of the last five games. He ranks second in the SEC with 1.7 steals per game during conference play.

It looks to be a positive trend for the Vols under head coach Rick Barnes. In his first season at UT, the Big Orange won just two true road games. Last year, they won four, and they have six more opportunities to best that total this season.

In SEC play, Tennessee leads the league in assists per game (14.6) and rebounding defense (32.4 rapg) while ranking second in scoring offense (77.9), and field-goal percentage (.459).
The Vols have 27 steals over their last three games.

In Saturday’s road win at South Carolina (who was 7-1 at home entering that game), Tennessee posted a season-best field-goal percentage of .575 while attempting a season-low 40 field goals.

Sophomore guard Lamonté Turner has made 17 consecutive free throws dating to Tennessee’s Jan. 6 win over Kentucky. In SEC play, his .944 free-throw percentage (34-of-36) ranks third in the league.