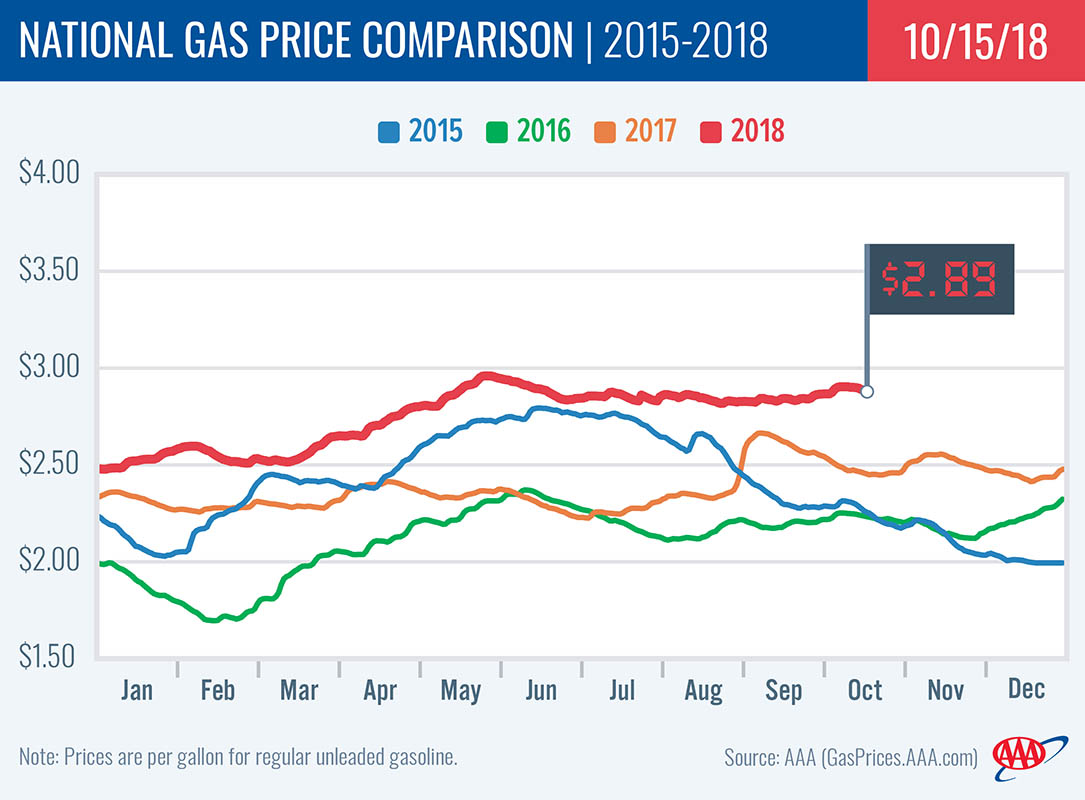 The majority of states have seen gas prices decrease on the week with the exception of a handful of states, some of which were impacted by fuel disruptions on the west coast and in the southeast. 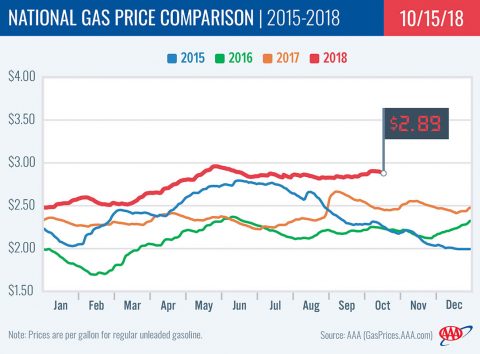 “Gas prices may be signaling that they are taking a turn toward slowly decreasing, which is a welcomed change for motorists who have been paying unseasonably high pump prices to fill-up as of late,” said Jeanette Casselano, AAA spokesperson. “Two events last week caused small spikes in retail prices, but those spikes are short-lived.”

On Wednesday, October 12th, Hurricane Michael made landfall in Florida and subsequently caused retail fuel shortages along its path in Alabama, Florida, Georgia, North Carolina and South Carolina. Roadway clean-up efforts are underway and as power is restored, fuel deliveries will be a priority.

In addition, last week, a natural gas pipeline rupture in the Western Canadian province of British Columbia forced three Pacific Northwest (PNW) Puget Sound refineries to shut production units. Those refineries are beginning to resume normal operations, but states in the PNW saw spikes in gas prices that will likely last into the week. 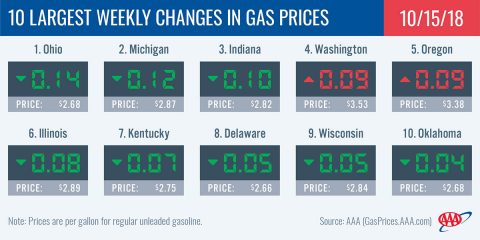 Hurricane Michael caused pump prices in Georgia (+2 cents) to increase on the week. However, Florida (-2 cents), South Carolina (no change) and Alabama (no change), which were also affected by the storm, saw minimal-to-no impact on gas prices. All other states in the South and Southeast are paying less or saw no change in pump prices on the week. Oklahoma (-4 cents) saw the largest price drop in the region.

One factor driving Georgia’s gas price increase is the shutdown of a Colonial Pipeline stub line, which is not a major pipeline, that runs from Atlanta south to Bainbridge. This shutdown, caused by a power outage, will have limited impact on Southern Georgia due to lower demand brought on by the storm. On Friday, officials reported the line could open over the weekend, but no reports have since been available.

For a second week, inventories saw a substantial drop, this time 1.2 million bbl on the week according to the Energy Information Administration (EIA). At 78.3 million bbl, total levels sit more than one million bbl ahead of this time last year. It is likely the next EIA report will not see a large inventory decrease due to Hurricane Michael’s impact on demand, unless there is a high number of exports on the week.

Pump prices in the West Coast region are the highest for retail gasoline in the country, with six of the region’s states represented landing in the nation’s top 10 most expensive list. Hawaii ($3.88) is the nation’s most expensive market, followed by California ($3.82), Washington ($3.53), Oregon ($3.38), Alaska ($3.37), Nevada ($3.29), and Arizona ($2.92). All prices in the region have increased on the week, with Washington and Oregon (+9 cents) leading the way, due to refinery shutdowns in the PNW.

The EIA’s weekly petroleum status report showed West Coast gasoline stocks increasing slightly to 28.28 million bbl during the week that ended on October 5th. Stocks are approximately 1.5 million bbl lower than where they were at this time last year, which has lead to price volatility as the region grapples with refinery shutdowns in the PNW. The year-on-year deficit will likely leave prices vulnerable to more shocks this week as refineries in the region resume normal operations.

For the first time in weeks, all Great Lakes and Central states are seeing gas prices decline, with some pump prices declining by double-digits.

A factor helping to drive down gas prices is the increase of nearly 600,000 bbl of gasoline inventories amid declining gasoline demand. With the build, EIA data measures levels at 52 million bbl once again, which, despite being a low inventory level for the region this year, is a 2.4 million year-over-year surplus. If inventories continue to increase, prices are likely to continue to decrease.

The majority of Mid-Atlantic and Northeast states are seeing cheaper or steady gas prices on the week. Motorists in Delaware (-5 cents), Washington, D.C. (-4 cents) and Maryland (-4 cents) saw the largest declines of all states in the region.

Not only did Delaware ($2.66) have the largest pump price drop on the week, but also it is the state with the largest month-over-month decrease at 17 cents.

A large 1.4 million bbl build in gasoline inventories helped to keep gas prices mostly stable in the region. With the increase, total inventories measure at 70.6 million bbl, which is the highest for the region in nearly two years. The last time the Mid-Atlantic and Northeast region measured at this level was January 2017. This should help to push gas prices down or stabilize them for motorists.

After weeks of increasing gas prices, motorists in Colorado (-2 cent) and Montana (no change) are seeing signs of relief at the pump. Prices are also cheaper in Idaho (-2 cents), Utah (-1 cents) and Wyoming (-1 cent) on the week.

With a drop of nearly 190,000 bbl, gasoline inventories register at 6.75 million bbl according to EIA data. Total inventory measures close to a 325,000 deficit compared to this time last year. If inventories can remain stable amid declining demand, motorists can expect gas prices to remain mostly steady.

At the close of Friday’s formal trading session on the NYMEX, WTI increased 37 cents to settle at $71.34. Oil prices saw whiplash last week, falling in line with the major selloff that occurred for the Dow Jones Industrial Average.

Crude prices may continue to climb this week as tensions in the Middle East take center stage, while U.S.-imposed sanctions on Iran’s energy sector continue to loom over the market.

However, crude storage levels are 52.2 million bbl lower than where they were this time last year. The year-over-year deficit has contributed to rising crude prices, which has led to the most expensive fall gas prices since 2014.

In related news, Baker Hughes, Inc. reported that the U.S. gained eight oil rigs last week, bringing the total to 869. When compared to last year at this time, there are 126 more rigs now than in 2017.