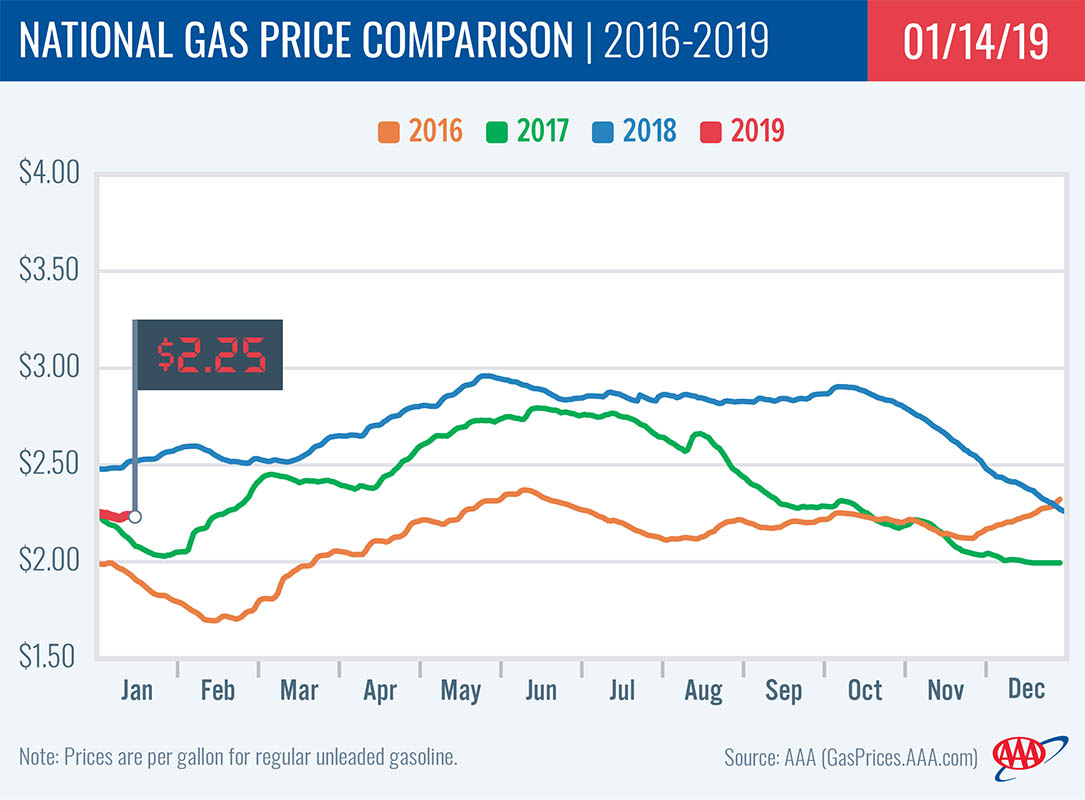 Tampa, FL – At a penny more expensive on the week, the national gas price average ($2.25) increased for the first time since October. Despite the increase, today’s average is still cheaper month-over-month (-14 cents) and year-over-year (-28 cents).

“The price of crude oil has been slowly, but steadily increasing since the beginning of the year, which is starting to push up pump prices,” said Jeanette Casselano, AAA spokesperson. 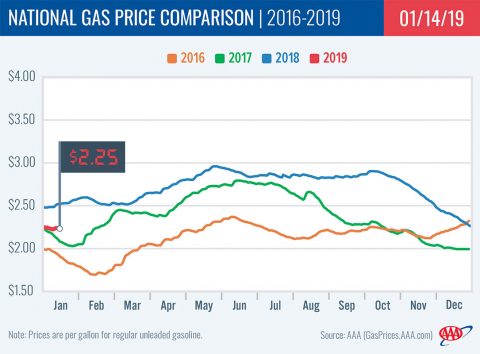 “The price per barrel (WTI) increased $3.00 from last Monday to close on Friday to settle at $51.00 per barrel,” Casselano stated.

Last week saw not only more expensive crude oil, but a sizeable build in U.S. gasoline stocks and a small increase in demand.

Overall demand has been low lately, contributing to the growth in stocks and helping to keep gas prices lower despite increasing crude prices.

Pump prices are rising across the Great Lakes and Central states with Ohio (+8 cents), Indiana (+8 cents), Missouri (+7 cents), Michigan (+6 cents), Iowa (+6 cents) and Kentucky (+4 cents) seeing the largest jumps in the region on the week. With these increases, many states’ averages have surpassed the $2.00/gal mark except for Missouri ($1.89) and Kansas ($1.97), though motorists can still find gas below the $2.00/mark in many states in the region. 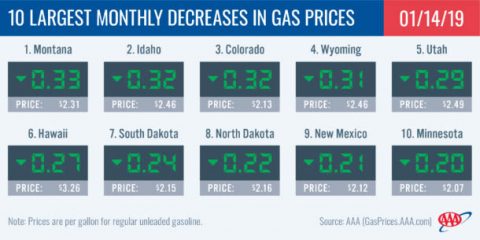 All states in the Rockies region, with the exception of Montana, make an appearance on the top 10 list of states with the biggest changes on the week: Wyoming (-8 cents), Colorado (-7 cents), Idaho (-7 cent) and Utah (-6 cents). For a second week, these four states saw some of the largest weekly decreases in the country. While not as large, Montana (-2 cents) saw a decrease as well.

Compared to a month ago, gas prices are nearly 40-cents cheaper in the region. In fact the top states with the largest month-over-month difference are all of the Rockies states: Montana (-33 cents), Idaho (-32 cents), Colorado (-32 cents), Wyoming (-31 cents) and Utah (-29 cents).

At 92 percent, regional refinery utilization is at its highest in weeks and gasoline stocks built, adding 242,000 bbl. Stocks are expected to continue to build throughout the winter and gas prices are likely to remain low.

Gas prices are fluctuating across the South and Southeast states with increases and decreases as much as four cents on the week. Regardless, the majority of states continue to carry the cheapest gas prices in the country, with seven states landing on the top 10 list for the least expensive gas: Arkansas ($1.90), Mississippi ($1.92), Alabama ($1.92), Louisiana ($1.92), Oklahoma ($1.93), Texas ($1.92) and South Carolina ($1.95)

Total stocks continue to measure above 89 million bbl. The week brought a small build, according to EIA data. 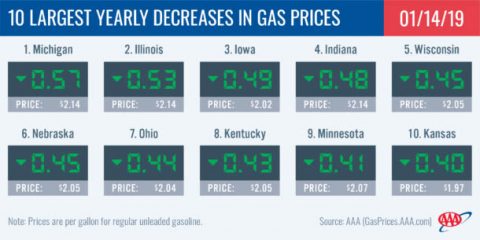 Pump prices across the Mid-Atlantic and Northeast states are making small jumps and decreases this week. While most states have cheaper gas prices, as much as four cents, a few states saw prices increase: Delaware (+4 cents), Tennessee (+3 cents), Maryland (+1 cent) and Pennsylvania (+1 cent).

As demand remains low, gasoline stocks continued to grow this week adding 2.5 million bbl. EIA data shows stocks sit at a 7.6 million surplus year-over-year, which should help to keep any increases minimal for the winter.

Pump prices in the West Coast region remain among highest in the nation, with all of the region’s states landing on the nation’s top 10 most expensive list.

EIA’s recent weekly report showed that West Coast gasoline stocks surged by approximately 2.4 million bbl to 30.7 million bbl during the week ending on January 4, the largest one-week build in nearly 26 years. However, stocks are approximately 2.7 million bbl lower than at this time last year, which could cause prices to spike if there is a supply challenge in the region this week.

At the close of Friday’s formal trading session on the NYMEX, WTI decreased $1.00 to settle at $51.59. Although they ended down for the day, crude prices increased overall last week due to optimism that the trade tensions between China and the U.S. may be subsiding. Reduced trade volatility will likely help curtail stalled global economic growth that could have reduced global demand for crude.

Moreover, with OPEC’s global pact with large non-OPEC crude producers (including Russia) to reduce crude production by 1.2 million b/d for at least the first six months of 2019 now in effect, the global glut of crude is expected to decline, helping to push crude prices higher. If crude prices continue to climb, motorists will likely see gas prices follow suit.

In related news, EIA reported that total domestic stocks of crude fell from 441.4 million bbl to 439.7 million bbl in its latest weekly petroleum status report. Additionally, Baker Hughes, Inc. reported that the U.S. lost four oilrigs last week, bringing the current total of active oilrigs to 873. When compared to the total number of active rigs at this time last year, there are 121 more rigs this year.