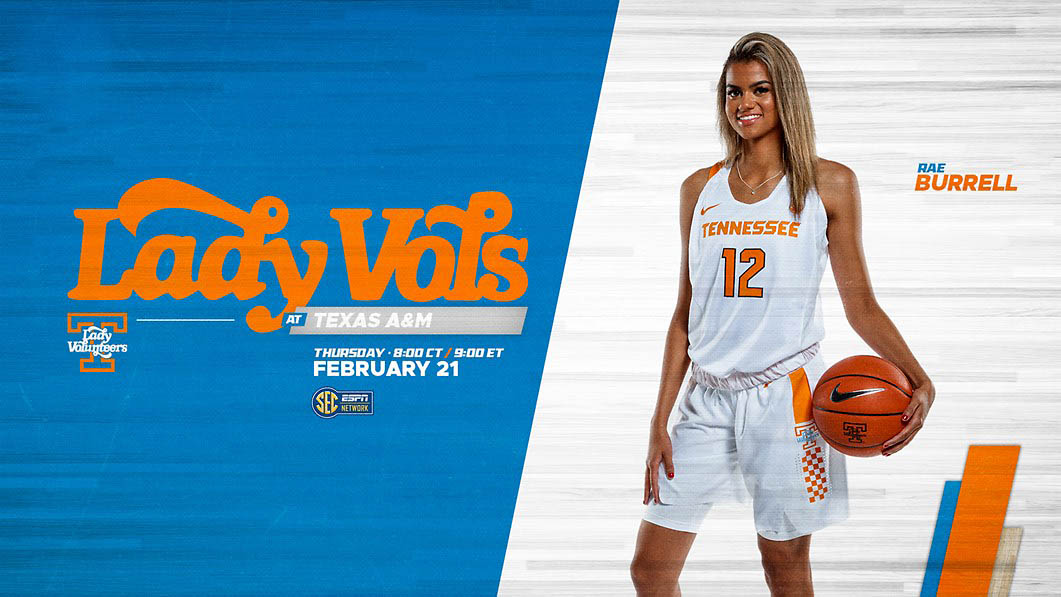 Including this match-up, the Tennessee Lady Vols have four contests remaining during the regular season. Two are at home (No. 13/13 South Carolina, Vanderbilt) and two are away (No. 21/22 Texas A&M, Ole Miss). UT is closing out a five-game stint where it has played four of those five contests on the road. UT is 2-1 on the road and 1-0 at home during that stretch. 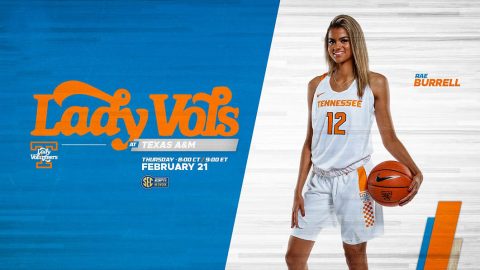 The Lady Vols enter this contest having won five of their past six games, including victories over LSU, Florida, Vanderbilt, Auburn and RV/RV Missouri.

The loss was at Mississippi State on February 10th. UT notched a season split with Missouri on Sunday in Columbia, 62-60, exacting revenge for a 66-64 Tigers win in Knoxville on January 6th.

Texas A&M comes into the game having won eight of its past 10 games, but it also has dropped two of its past three. The Aggies are coming off a 92-64 home loss to No. 5/5 Mississippi State on Sunday and lost at Missouri on February 7th, 70-65 in overtime.

UT also lost to MSU by 28, falling on February 10th in Starkville, 91-63, while playing without point guard Evina Westbrook, who sat out the game due to a violation of team rules (she missed a class).

VFL Films product Courtney Lyle (play-by-play) and LVFL Tamika Catchings (analyst) will have the call for the SEC Network broadcast.

Holly Warlick and the Big Orange women are 6-4 vs. hall-of-fame coach Gary Blair and A&M since the Aggies joined the Southeastern Conference.

A&M is 2-0 in overtime games vs. UT, defeating the Lady Vols in an extra frame the past two times these squads met in College Station.

Rennia Davis has an 11.5 ppg. average vs. the Aggies in two career games, scoring 12 in College Station and 11 in Knoxville a year ago.

Cheridene Green scored 12 at A&M vs. the Aggies, while Meme Jackson tallied 10 at home vs. Gary Blair’s squad.

Tennessee has turned the tables after a rough start to the league schedule, winning five of its last six games to go from 1-5 in the league to 6-6 entering the Texas A&M game.

After bursting to an 8-0 record and standing 12-1 after opening SEC play with a win at Auburn, a youthful Lady Vols team (7 of 10 active players are freshmen and sophomores) went through some harsh growing pains, losing six straight games from Jan. 6 to Jan. 24.

Losing four of the games by a combined nine points, UT dropped five consecutive league tilts before bouncing back with wins vs. LSU, Florida and Vandy, a loss at Mississippi State and wins over Auburn and Missouri.

UT trailed at No. 6/6 Mississippi State by three in the third quarter before the Bulldogs pulled away.

UT also fell to Notre Dame during the midst of the previously-mentioned six-game skid, 77-62, in a game the Lady Vols led at the half by three en route to their sixth straight loss.

The Notre Dame game seems to have been a turning point for this team.

Keep in mind that UT not only lost All-SEC players Mercedes Russell and Jaime Nared from a year ago, they lost the SEC’s 2018 6th Woman of the Year in 5-7 guard Anastasia Hayes, who was dismissed from the team due to a rules violation, and 6-3 graduate transfer Lou Brown, who started 71 games at Washington State and was expected to play a key role for Tennessee this season before being sidelined by a torn ACL.

The Tennessee Lady Vols ranks No. 1 in the Southeastern Conference and No. 3 in the NCAA in rebounds per game at 45.04.

The Lady Vols are allowing only 61.8 points per contest in their six SEC wins this season, compared to 77.0 in their SEC losses.

Tennessee earned a hard-fought victory over RV/RV Missouri on Sunday, coming from four points down in the final stanza to claim a 62-60 triumph in front of a crowd of 8,559 in Mizzou Arena.

MU (19-8, 8-5 SEC) was led by Amber Smith with 14 points and five rebounds. Sophie Cunningham and Cierra Porter were close behind with 13 apiece.

The Tigers led for the first five and a half minutes of the final frame before Davis knocked down a three to put UT up by one at 55-54. Davis again came up clutch, knocking down two free throws with 52 seconds to play to put the Lady Vols up 62-60. Akira Levy got off a 3-pointer that would have given Missouri the lead with two seconds remaining, but it came up short and UT ran out the clock.

Chennedy Carter was that player, and the dynamic guard is leading the SEC at 22.1 ppg. in all games and 23.1 ppg. in league contests.

Carter was the 2018 consensus national freshman of the year, an AP All-American and All-SEC First Team.

Texas A&M (19-6, 8-4 SEC) stormed out of the gates, as Chennedy Carter had 16 of her 28 points in the first quarter, jumping out to a 24-20 lead after a frame. Mississippi State only led 43-36 at halftime but extended its lead by making its first four 3-pointers in the second half.

In addition to Carter, who had 20+ points for the seventh time in the last eight games, Kayla Wells added 13 and Shambria Washington chipped in 10. Carter tied a Texas A&M record with her 32nd-consecutive game of scoring 10+ points.

Jaime Nared added 18 points for the Lady Vols, including four 3-pointers. Rennia Davis and Cheridene Green netted 12 each, and Evina Westbrook put up nine points while dishing out seven assists.


Coming Up For Tennessee Lady Vols

After its trip to Aggieland, Tennessee is back at home for its final two regular season home games. UT hosts No. 13/13 South Carolina on Sunday at 3:00pm CT (ESPN2) and Vanderbilt next Thursday at 7:00pm (SEC Network) in the Senior Night game for Cheridene Green and Meme Jackson.