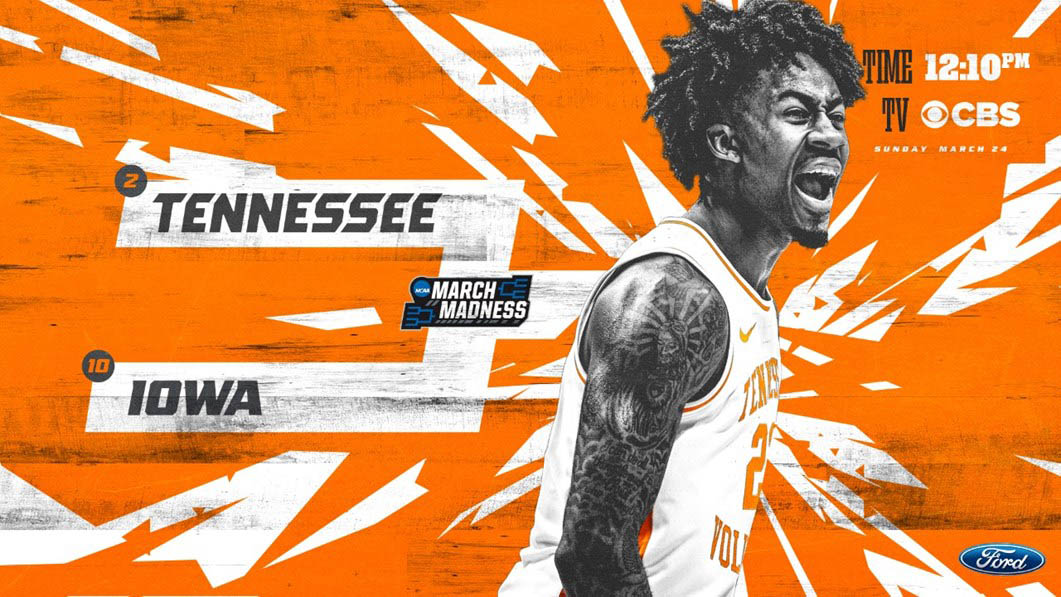 Columbus, OH – With a spot in the Sweet Sixteen on the line, the Tennessee Vols are set to take on 10th-seed Iowa in the second round of the NCAA Tournament at Nationwide Arena in the South Region. The game tips at 11:10am CT and will be televised live on CBS.

Tennessee is 30-5 on the season. That impressive record includes a school-record 19-game winning streak, a program-record-tying three victories over top-five opponents and the second most victories in a single season in program history. The Tennessee Vols spent four weeks atop the Associated Press Top 25 rankings, and for the first time in program history, UT spent the entire season ranked among the top 10. 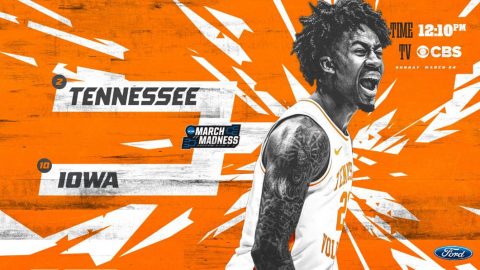 National Player of the Year candidate Grant Williams is just the 10th player in conference history to win SEC Player of the Year in back-to-back season and was the first since Arkansas’ Corliss Williamson did so in 1994 and 1995.

Williams was also tabbed first-team All-SEC after finishing the regular season as the top scorer in the SEC with 19.3 points per game.

He has been one of the nation’s most versatile and reliable players this season, averaging 7.5 rebounds, 3.1 assists, 1.4 blocks and 1.1 steals per game while shooting 57 percent from the field and an impressive 82 percent from the charity stripe.

Iowa (23-11) earned an at-large bid for the NCAA Tournament out of the Big Ten Conference and advanced to the second round with a 79-72 victory over No. 7 seed Cincinnati on Friday. The Hawkeyes are trying to advance to the Sweet Sixteen for the first time since 1999.

Tennessee’s all-time series with Iowa is tied at 2-2. All four meetings took place at neutral sites.

Rick Barnes owns a 3-1 head coaching record vs. Iowa, with all meetings coming during his tenure at Texas. Barnes is 29-29 against current members of the Big 10.

These teams last met in the First Four in 2014. Tennessee rallied from a 12-point deficit to win in overtime.

A win by the Volunteers on Sunday would give Tennessee its eighth all-time Sweet Sixteen appearance—and its sixth since 2000.

Rick Barnes could become the 11th or 12th head coach to lead a third Division I program to the Sweet Sixteen.

If the Vols defeat Iowa on Sunday, possible Sweet Sixteen opponents next Thursday are No. 3 seed Purdue and No. 6 seed Villanova. Those teams meet Saturday at 7:40pm CT (TNT).

About the Iowa Hawkeyes

Iowa (23-11) earned an at-large bid for the NCAA Tournament out of the Big Ten Conference and advanced to the second round with a victory over Cincinnati Friday.

Cook, who is also the team’s leading rebounder at 7.8 boards per game, was tabbed a second-team All-Big Ten selection by the media and a third-team selection by the coaches. Bohannon earned third-team accolades, Garza was an honorable-mention selection and Wieskamp earned a spot on the league’s all-freshman team.

Bohannon leads the Hawkeyes in assists (117) and has led the Big Ten in free-throw percentage each of the last two seasons. The junior guard also is a threat from beyond the arc, where he’s connected on 73 3-pointers this year.

This is the program’s third NCAA berth in the last eight years and its second under fourth-year head coach Rick Barnes.

Tennessee is 1-0 in its lone previous matchup against a No. 10 seed in the NCAA Tournament.

Tennessee has recorded 30 wins for the second time in program history. This also is the first time the Vols have won at least 25 games in back-to-back seasons.