Washington, D.C. – The U.S. labor market continues to build on its impressive gains over the past three years of the Donald Trump Administration. According to the Bureau of Labor Statistics’ monthly Employment Situation release, nonfarm payroll employment increased by 273,000 in February—adding nearly 100,000 more jobs than market expectations.

Additionally, preliminary payroll growth estimates for January and December were revised upward by a total of 85,000 jobs, bringing the monthly average over the past three months to 243,000 new jobs.

To put these gains in context, in only two months, the U.S. economy has added 105,000 more jobs than the Congressional Budget Office projected would be created over the entirety of calendar year 2020 (441,000) in its final pre-2016 election forecast.

Considering the historically low unemployment rate, accelerating job growth at this point in the recovery shows the U.S. economy is strong and resilient against shocks. It is much more difficult to create jobs later in an economic expansion, as continued job growth at this elevated level requires bringing workers off the labor market’s sidelines.

This is exactly what is happening under President Donald Trump: Over the past three months, the average share of new workers who came from outside of the labor force was 72.6 percent, near the historic high set at the end of 2019. Because of people coming off the sidelines, job growth relative to the number of unemployed is more than 60 percent higher under President Trump than it was under the previous administration’s expansion.

The Trump Economy continues to drive increased labor demand and an increase in wages as businesses compete to raise pay to attract workers. Nominal average hourly earnings increased at a 3 percent rate year-over-year, making February the 19th consecutive month that this measure of wage growth has been above 3 percent—a level not seen in more than a decade. 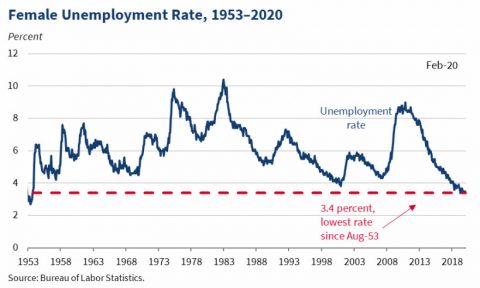 At 3.3 percent, nominal wage growth for production and non-supervisory workers was even higher than overall wage growth. Under President Donald Trump, workers’ wages are continuing to rise faster than managers’—the opposite of what occurred under the previous administration. Evaluating lower-income workers’ wage gains in states that did not raise their minimum wages shows that this recent growth is a result of the strong economy, not minimum wage hikes.

After gaining 4.3 million jobs since President Trump’s election, women now make up a majority of payroll employment. Last year, 71.2 percent of new jobs went to women, up from 45.7 percent over the expansion before President Trump took office.

Initial claims for unemployment insurance, which is one of the Federal Government’s closest to real time labor market indicators, remained low at 216,000 in the week ending on February 29th. With this week’s release, initial claims have remained at or below 300,000 for 261 consecutive weeks—the longest such streak since at least 1967, despite the labor force more than doubling since then. Furthermore, monthly claims for unemployment insurance adjusted for the size of the population reached the lowest level ever recorded this year.

Strong labor market gains are leading to more work and higher pay for workers across demographics, but women have seen especially impressive gains under President Trump. With 546,000 jobs already created over the first two months of 2020 and workers continuing to come off the sidelines, there is reason to expect that the resilient labor market will continue breaking records over the rest of the year.