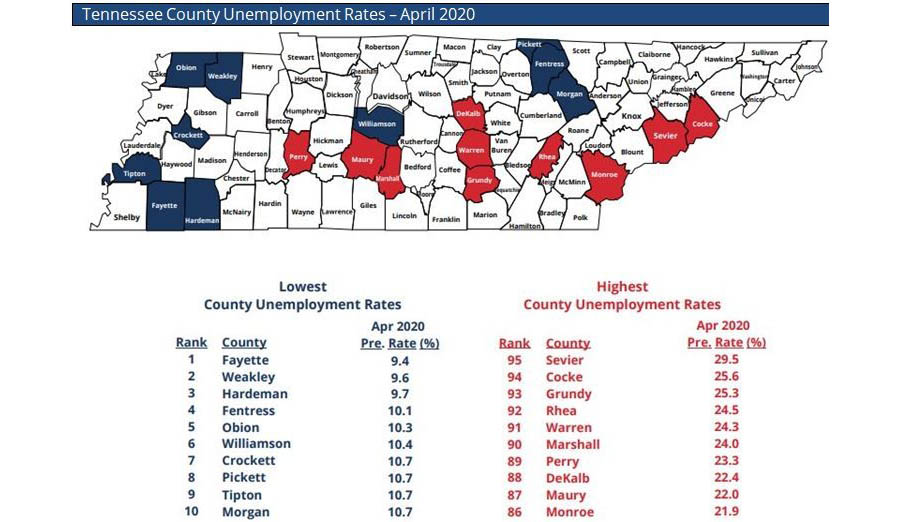 Nashville, TN – Statistics released today by the Tennessee Department of Labor and Workforce Development show a staggering increase in unemployment for each of Tennessee’s 95 counties in April as many businesses closed to help slow the spread of COVID-19 Coronavirus. 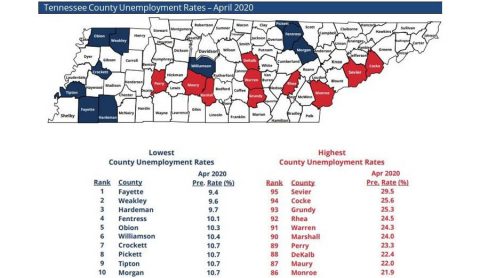 The unprecedented and historic spike in unemployment impacted some counties more drastically than others, but no area of Tennessee escaped the pandemic’s effect on the state’s workforce.

Montgomery County unemployment rate jumped up to 15.3 percent in April, up 11.7 percent from March’s 3.6 percent.

Fayette County had Tennessee’s lowest unemployment rate in April. At 9.4%, the county’s rate increased by 6.1 percentage points when compared to its revised March rate of 3.3%

Weakley County had the second-lowest unemployment rate for the month at 9.6%, followed by Hardeman County at 9.7%.

Fayette County, Weakley County, and Hardeman County were the only counties in the state with unemployment rates below 10% in April.

Sevier County recorded Tennessee’s highest unemployment rate for the month. The county’s new jobless figure of 29.5% represents a staggering spike of 26 percentage points when compared to its revised March rate of 3.5%.

Neighboring Cocke County had the second-highest jobless rate in April at 25.6%, a 20.9 percentage point increase from the previous month. Grundy County ranked third-highest with a rate of 25.3%, which is a 21.1 percentage point spike when compared to March’s rate.

When comparing Tennessee’s three largest cities, Nashville had the highest unemployment rate in April. The city’s rate of 15.9% is a 13.5 percentage point increase over its revised March rate of 2.4%. Memphis recorded a rate of 14.3%, a spike of 10.1 percentage points from the previous month, and Knoxville’s April rate of 14.7% is an 11.8 percentage point jump.

Statewide, unemployment reached a historic high in April. The seasonally adjusted rate of 14.7% surpassed the previous all-time high figure of 12.9% in January 1983.

A complete in-depth analysis of unemployment data for each of Tennessee’s counties is available here.