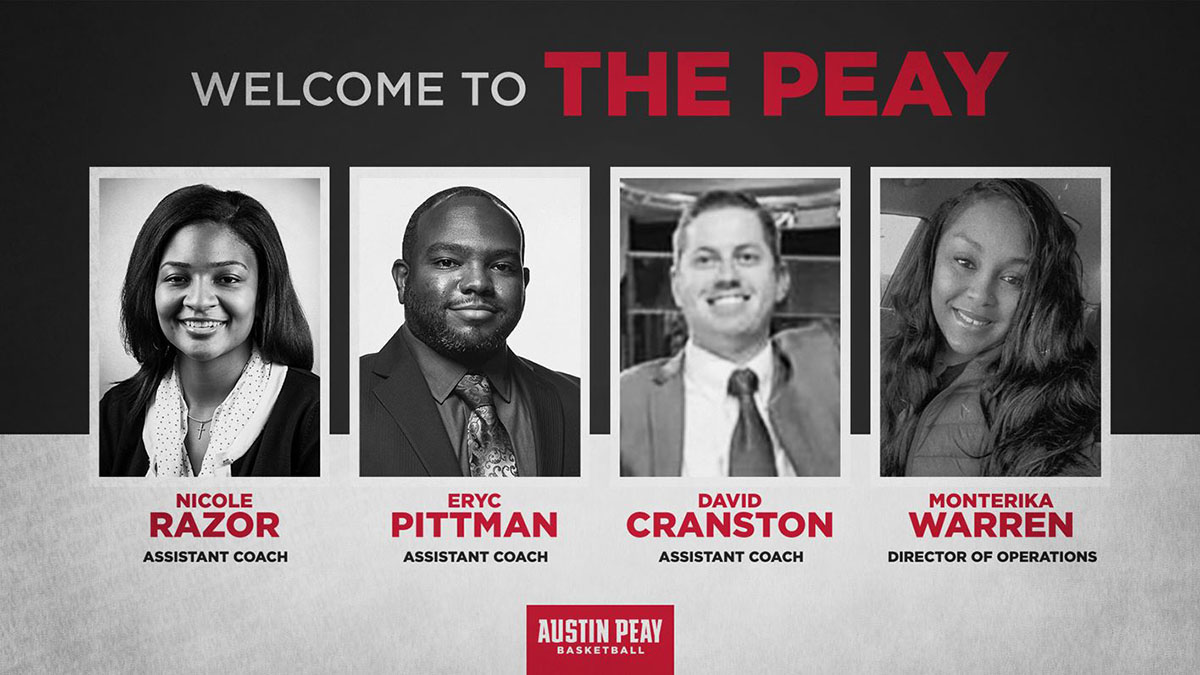 Clarksville, TN – Austin Peay State University (APSU) head women’s basketball coach Brittany Young has completed her coaching staff for her first season in Clarksville with the addition of assistant coaches Nicole Razor, Eryc Pittman, and David Cranston, as well as Monterika Warren, who will serve as the team’s Director of Operations. 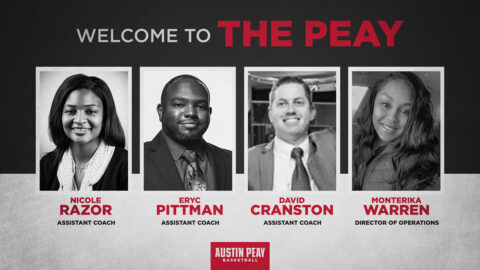 “I am so excited about the staff that we have been able to assemble,” said Young. “They are all tireless workers that believe in the vision of Austin Peay women’s basketball, our Athletics Department, and the University as a whole. Our staff will cultivate genuine relationships with every member of our program in order to help them reach their full potential. We look forward to fostering an environment where our young people can continuously grow as students, athletes, and ultimately as people.”

After five seasons at Anderson University, Razor comes to Clarksville after having most recently served as the Trojans associate head coach. During Razor’s tenure at Anderson, the Trojans went 111-37 (.750), while winning a trio of SAC Regular Season Championships (2016, 2019, & 2020), one SAC Tournament Championship (2019), and advancing to four-straight NCAA Division II Tournaments (2016-2020).

Following the 2018-19 season, the Women’s Basketball Coaches Association (WBCA) named Razor to its Thirty Under 30 list, which recognizes 30 up-and-coming women’s basketball coaches age 30 and under at all levels of the game.

Pittman joins Young’s staff with OVC experience, having served as an assistant coach on Rick Pietri’s staff at Jacksonville State for the past six seasons. While working with the Gamecocks’ perimeter players, Jacksonville State averaged 6.1 three-pointers per game during Pittman’s tenure.

After spending last season at Thomas Jefferson College, Cranston has spent most of his coaching career at Ursuline Academy in Wilmington, Delaware. In two separate stints as an assistant coach at Ursuline, Cranston was a part of four teams that won the Delaware State Championships.

Cranston also has head coaching experience at the AAU level, where he led the 17U Lady Runnin’ Rebels of Haverford, Pennsylvania to 2016 Under Armour National Championship. During the 2012-13 season, Cranston got his first collegiate coaching experience, serving as an assistant coach at Division II West Chester University.


Finally, Warren will take over as the Director of Operations after spending two years coaching women’s basketball at Halifax Academy in Daytona Beach, Florida. From 2016-18, Warren played basketball at Bethune-Cookman and helped the Wildcats win a pair of regular-season Mid-Eastern Athletic Conference titles and make back-to-back trips to the Women’s National Invitation Tournament.

Nieja Crawford also will remain on Young’s staff as a graduate assistant. A four-year contributor for the Govs, Crawford averaged 15.3 minutes, 4.7 points, and 3.2 rebounds per game in her career. Crawford graduated from Austin Peay in 2020 and is now working toward a Master’s of Science in Health and Human Performance with a concentration in Performance Enhancement and Coaching.