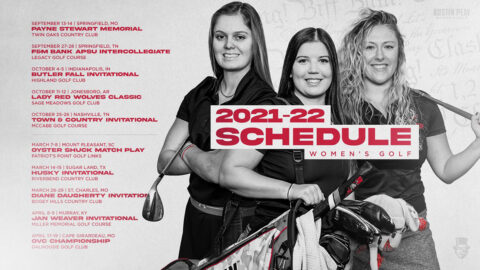 The 10-tournament slate features plenty of new challenges, including the home tournament in a new locale, a pair of new tournaments in March, and a trip to Dalhousie Golf Club to close out the season in April.

“This year brings a breath of fresh air to all of us,” Combs said. “Our fall and spring schedules give us some variety between tournaments that will really challenge us and tournaments that we have a great chance at winning.”

“I know the girls and I are really looking forward to having a fall season this year after missing out on last year. We are also looking forward to our match play event in the spring. That will be a newer format that a lot of the girls haven’t really competed in before,” continued Combs.

If the APSU Govs’ fall schedule looks familiar, that’s because it is—Austin Peay State University is repeating four of the five stops made in Fall 2019 during its Fall 2021 schedule, starting with the Payne Stewart Memorial (September 13th). The last time the Govs visited Twin Oaks Country Club, Taylor Dedmen’s final-round 73 pushed her up to 21st overall.

To end September, the Govs are hosting the 2021 F&M Bank APSU Intercollegiate at a new spot—Legacy Golf Course in Springfield, Tennessee, September 27th-28th. This will be the fourth different home for the tournament, now in its 22nd year, with the Govs seeking their first win in the event since 2015.

The lone new stop on the Austin Peay State University fall schedule takes the Govs to Indianapolis for Butler’s Fall Invitational (October 4th), located at Highland Golf Club. Austin Peay State University closes the fall with the Lady Red Wolves Classic (October 11th) and the Town & Country Invitational (October 25th), which the Govs won in 2017 and where Dedmen finished tied for sixth in 2019.

Spring begins with a match play outing in Mount Pleasant, South Carolina at The Citadel-hosted Oyster Shuck Match Play. The Govs were slated for this event to start the 2019 spring campaign before circumstances intervened.

Austin Peay State University’s journey to the Lone Star State will begin the stroke-play portion of the spring campaign at the Husky Invitational, hosted by Houston Baptist, at Riverbend Country Club in Sugar Land (March 14th). Not only will it be the Govs first visit to Houston Baptist’s home event, but it will also be Austin Peay State University’s first venture into Texas since at least the turn of the century. The Govs bring March to an end with a trip to Southern Illinois’ Diane Daugherty Invitational at Bogey Hills Country Club in St. Charles, Missouri (March 28th).

April has long been set in stone for the Govs—it will begin with the Murray State-hosted Jan Weaver Invitational (April 7th) at Miller Memorial Golf Club and ends with the Ohio Valley Conference Women’s Golf Championships (April 17th) at Dalhousie Golf Club in Cape Girardeau, Missouri.

The APSU Govs have closed the spring with Murray State’s event ahead of the conference championships every season since 2015, aside from the pandemic-shortened 2020 campaign.