The Eagles won both the OVC regular-season and tournament titles a season ago, compiling a 15-1 conference record and defeating Jacksonville State 3-0 in the title match to advance to the NCAA Women’s Volleyball Championship. There, they defeated Creighton in the opening round before falling to Florida. 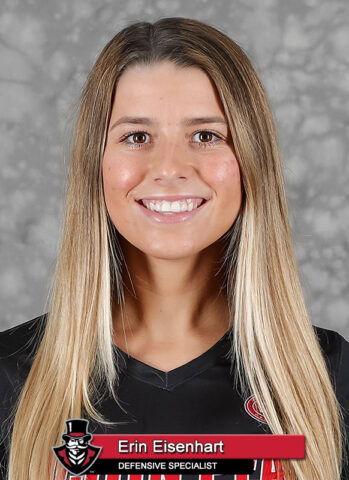 Last week at the WKU Volleyball Invitational, the Govs were paced by junior defensive specialist Erin Eisenhart who was named to the all-tournament team with 32 digs. Her 14 digs against the hosting Hilltoppers tied her career-high, a mark she set against IUPUI, September 10th.

Morehead State (4-7) is led by fifth-year senior Olivia Lohmeier who has 1,688 career kills and ranks 20th nationally with 4.47 kills per set. Lohmeier tallied 39 kills, September 3rd against Cleveland State, which is the most of any women’s volleyball player in the NCAA this season.

While the Eagles lead the all-time series 47-31, the APSU Govs have done well in defending their home court, with a 19-12 record against Morehead State in Clarksville.

Moore, who was an all-tournament selection at Marshall and Harvard, posted 28 kills (2.55/set) and 19 digs (1.73/set) at Western Kentucky. Her 10 kills and 12 digs against Ohio was her sixth double-double this season.


Junior defensive specialist Erin Eisenhart was an all-tournament selection at the WKU Volleyball Invitational, posting 32 digs (2.91/set) at Western Kentucky. Her 14 digs against the Hilltoppers tied her career high, a mark she set against IUPUI earlier this season.

Right-side hitter Mikayla Powell, the 2020-21 NJCAA Division II National Player of the Year, earned all-tournament honors at the Indiana State Invitational where she finished the weekend with a season-high 18 kills and .417 attack percentage against host Indiana State.

Right-side hitter Tegan Seyring paced the Govs with 14 kills against Ohio in the tournament finale in Bowling Green, Ky.

The APSU Govs setter tandem of Caroline Waite and Kelsey Mead are in their second year combining to quarterback the Govs offense. Mead is averaging 4.48 assists and 1.48 digs per set with nine aces. Waite has averaged 5.05 assists and 2.37 digs per set over the opening four weeks.

Middle blocker Maggie Keenan has recorded five or more blocks six times this season, including a streak of seven straight matches that ended with a four-block effort against Western Kentucky. She has a team-best 35 blocks (1.14/set) this season.

Freshman Libero Jessica Lary took over at libero during the Govs weekend at Harvard. In her 29 sets as the starting libero, she has averaged 3.59 digs per set.

Following the Govs matches against Morehead State, the Austin Peay State University volleyball team will host SIU Edwardsville in a two-match series, October 1st and 2nd at the Dunn Center.