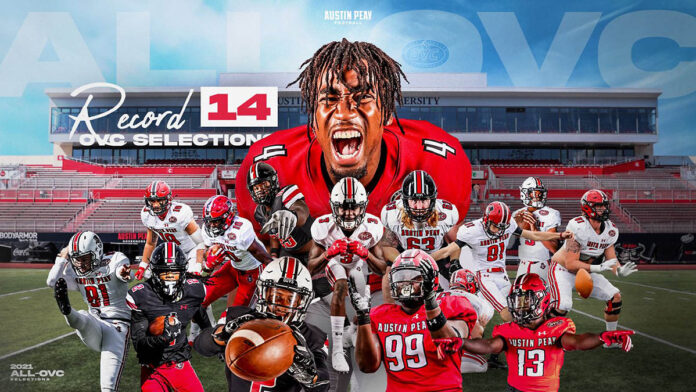 The same was nearly true of the defensive backfield, where graduate students Koby Perry, Johnathon Edwards, and Kordell Jackson locked down three of the five available spots. Redshirt junior Bucky Williams was the Govs’ lone representative on the first-team offensive line.

“It is really exciting to see our program produce a record-tying seven First Team All-OVC selections and a record-breaking total of 14 All-OVC selections,” said APSU head coach Scotty Walden. “It is an honor for our guys to be recognized for all of their hard work and dedication this season. I am especially proud because many of these guys played a full spring and fall season and still never wavered in their preparation and performance. It’s great to see their hard work pay off!”

Harley opened 2021 with a touchdown reception in each of his first five games, tacking on 100-yard receiving days at Chattanooga (128 yards) and Eastern Kentucky (136). He saved his best performance for last, notching a career-best 148 yards and a touchdown at Tennessee State. Along the way, Harley became the fifth receiver to surpass 2,000 career yards, finishing with 2,201 receiving yards. He also notched his 20th career touchdown at Murray State, becoming one of three receivers to reach that milestone.

The heir apparent to what is becoming quite the wide receiver tradition at Austin Peay State University. He became notorious as a big-play receiver in the first three weeks with a 50-yard reception in each game. After opening OVC play quietly, he broke out with a 6-reception, 137-yard, 2-touchdown outing against Eastern Illinois. But he also saved the best for last, with a memorable 7-reception, 237-yard, 4-touchdown performance against Tennessee Tech that very well sealed his first team and all-newcomer recognition.

While Harley and McCray attracted most defense’s attention, Minter proved to be a dangerous No. 3 receiver in the OVC’s best passing offense. He was seventh among OVC receivers in yards per game (40.6) and fifth in receiving touchdowns (4). Minter made his statement with a 132-yard day against Eastern Illinois that saw him need just three receptions to surpass 100 yards.

Williams earns his second-consecutive First Team All-OVC nod after captaining the Govs offensive line. That group allowed Austin Peay State University’s offense to become the FCS’ No. 18 passing game, averaging 70 yards more per game than the next closest passing offense. Williams also proved his durability with more than 1,400 snaps played on the line since the beginning of the Spring 2021 season in February.

Perry’s year-to-year improvement was remarkable. Last spring, he finished with 36 tackles (4.0 pg), three tackles for loss, and two pass breakups. This season? The OVC Defensive Player of the Year compiled 85 tackles (7.7 pg), eight tackles for loss, two interceptions, and three pass breakups. His 75-yard interception return for a touchdown at UT Martin was a masterclass in reading the play and attacking the point of the pass. Yet that game was even more impressive thanks to his 16 tackles – most by a Governor in 2021 – he was quite literally everywhere at once.

When you open the season with two interceptions, the odds are good something special is in store. And so it was for Edwards, who followed his two-pick day at Chattanooga with five more interceptions to finish the season with seven – second-most in program history. Tack on his two fumble recoveries, and Edwards alone was responsible for nine of the APSU Govs’ FCS-best 26 takeaways in 2021. Edwards’ lasting memory from the season will be his 3-interception, 2-pass breakup, 4-tackle day against Eastern Illinois that saw him earn OVC Defensive Player of the Week honors.

In a season hampered by an injury suffered at Ole Miss that ultimately ended his season at the end of October, the Govs’ elder statesman again found his form at times. He opened the season with sacks in back-to-back games (Chattanooga and Ole Miss). Jackson then posted a 12-tackle day at Southeast Missouri and finished the season with 41 stops – his 6.8 tackles per game are a career-best mark. The two-time Consensus All-American closed his career with a third-straight First Team All-OVC award.

The 2020-21 OVC Co-Freshman of the Year followed his impressive freshman campaign with a solid sophomore outing. He was ranked among the FCS leaders and led the OVC in passing touchdowns (19), passing yards (2,625), yards per completion (13.7), and total offense (268.5 ypg). Ellis became only the third Governors quarterback to record 2,500-plus passing yards in a season. He also set program records for passing yards per game (262.5) and total offense per game (268.5).

McKee earned Second Team All-OVC honors for the second-straight season. He was part of an offensive line group that allowed Austin Peay State University’s offense to become the FCS’ No. 18 passing game, averaging 70 yards more per game than the next closest passing offense. APSU also led the OVC in scoring offense (32.5 ppg, 23rd in the FCS) and total offense (419.2 ypg, 26th in the FCS) thanks to the effort of its offensive line.

The graduate transfer impressed in his first season at Austin Peay State University, earning Second Team All-OVC recognition. He was part of an offensive line group that allowed Austin Peay State University’s offense to become the FCS’ No. 18 passing game, averaging 70 yards more per game than the next closest passing offense. APSU also led the OVC in scoring offense (32.5 ppg, 23rd in the FCS) and total offense (419.2 ypg, 26th in the FCS) thanks to the effort of its offensive line.

In his sophomore season, Allen made the jump to Second Team All-OVC after a campaign that saw him record 11 tackles for loss and five sacks. His 11 TFLs were tied for most in the OVC, and his five sacks were third-most in the league. Allen also averaged 3.3 tackles per game, ranking fifth among OVC defensive linemen. His two-and-half sacks and two hurries against Eastern Illinois were the highlight of a notable season.

From walk-on tight end to back-to-back All-OVC honors at linebacker, it has been quite a career for McDonald. After earning first-team recognition last spring, McDonald had to find new ways to make an impact and yet still ranked among the league’s Top 10 in tackles (6.5 per game) and Top 20 in tackles for loss (0.6 per game). McDonald had a pair of 10-tackle outings (at Eastern Kentucky and against Southeast Missouri) and recorded 2.5 tackles for loss against Eastern Illinois.

Not bad for a freshman season: an Austin Peay record-tying 14 field goals, a record-breaking 77.8 field-goal percentage, and a 78-point season that is second-best among APSU kickers all time. Trujillo quickly became a strategic piece to a Governors’ offense that led the OVC in scoring, making a field goal in each game he attempted one. He had a particular fondness for scoring against Tennessee State, going 3-for-4 on field goals in each game, and scoring 22 total points in Austin Peay State University’s two outings against their rival.

Rigney became just the third Governors punter to average more than 40 yards per punt over a season, his 40.73 yards per punt ranking fifth on the program’s single-season list. His 40.84 punting average in league play was second-best among the league’s punters. Among his 55 punts, he saw 14 downed inside the 20-yard line, and seven go for 50-plus yards, including a 60-yarder against Tennessee State. His 46.63 punting average against the Tigers wasn’t his best average of the year, but the outing saw him boom an impressive three 50-yard kicks out of the eight he attempted that day.