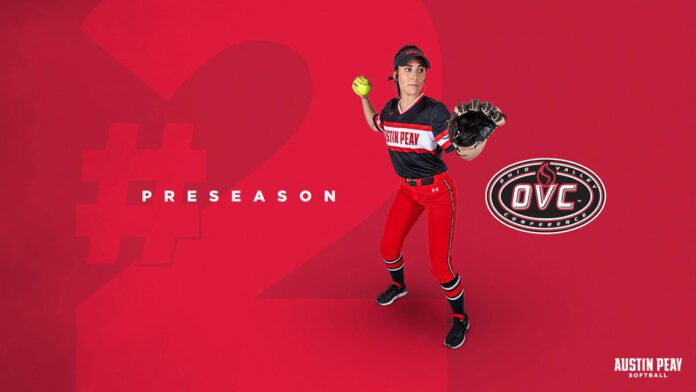 Brentwood, TN – After a third-place finish a year ago, the Austin Peay State (APSU) University’s softball team has been tabbed to finish as the league’s runner up in the 2022 Ohio Valley Conference’s preseason softball poll, as voted on by the head coaches and softball Sports Information Directors and announced by the conference office Thursday morning.

The Governors, who finished last season with an 27-16 overall record, including a 22-11 mark in OVC play, earned two first-place votes and 140 total points in the poll, trailing only defending regular-season champion Southeast Missouri’s 157-point total and 16 first-place votes.

APSU senior third baseman Lexi Osowski was also selected as one of the OVC’s players to watch in 2022, after coming off a 2021 season where she led all OVC  players in batting average (.425) and earning All-OVC First Team honors.

In 2021, Osowski led the league with a .425 batting. She also finished in the top in the conference in hits (4th), runs (4th) and slugging percentage (9th ). Osowski was also named to the National Fastpitch Coaches Association Central Region Third team for the second time in her career.

Cavanaugh was named to the All-OVC Second Team last year. She recorded a league-leading seven triples last season. Cavanaugh finished the season with a .376 batting average and 47 hits.

Burton was named the 2021 OVC Player of the Year and earned a spot on the All-OVC Fist Team. She led the league in home runs with 18 which also ranked 9th in the NCAA. She also paced the team in runs scored (43) and RBI (46) which both ranked second in the league.

Spicer made 30 appearances as a freshman, starting 18 games. She finished with a 9-19 record and a 4.24 EAR. She struck out 79 batters in 157 innings. Spicer also posted a .265 batting average with two doubles, one home run and six RBI.

Gilmore was named to the All-OVC second team last year after recording a team-leading .327 batting average and 40 RBI. She also scored 22 times and notched a .532 slugging percentage in 2021. She started all 51 games for the Racers and had a league leading 17 doubles last year.

Baalman was named to the All-Newcomer team last season. She won her last six outings of the year, including four innings of shutout against Belmont to end the season. She led the team in wins (10), complete games (12) and strikeouts (93).

Kelley was named to the All-OVC First Team last year after breaking UT Martin’s single-season home run record (17) and leading the league in RBI (48) and total bases (112). She posted a .338 batting average with 26 runs, 51 hits and 10 doubles while recording a .742 slugging percentage.