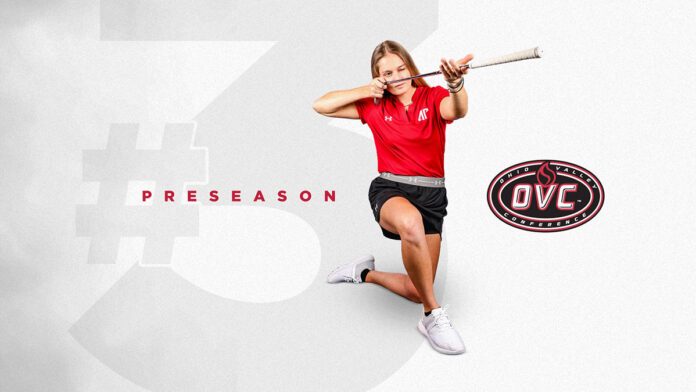 “After a very successful fall semester, we are looking forward to a competitive spring,” said head coach Jessica Combs. “We will continue to works towards our ultimate goal of winning a conference championship.”

Austin Peay State University won a pair of tournaments during the fall campaign, starting with the program’s first-ever three-round tournament victory at the Butler Fall Invitational in Indianapolis. The Govs shot an 878 as a team to beat Belmont by two strokes and win the event at Highland Country Club.

At the Butler Fall Invitational, freshman Erica Scutt posted a second-place finish with a 210-tournament total. Scutt’s second-place finish was the best by a Governors’ golfer since Reagan Green’s runner-up finish at the 2018 Citrus Classic. Her 210 score was the second-best aggregate in program history, only two shots behind Taylor Dedmen’s 208 at the 2019 Spring Break Shootout.

APSU won their second event at Tennessee State’s Town & Country Invitational, where they ran away from Belmont to post an 18-stroke victory at McCabe Golf Course in Nashville. Freshman Kaley Campbell and Scutt fired even-par 144’s to finish the tournament tied for second, while redshirt junior Shelby Darnell added a two-over 146 to finish in fourth place.


The Governors will kick off spring portion of the 2021-22 season when they play at the Oyster Shuck Match Play, March 7th-8th, hosted by The Citadel in Mount Pleasant, South Carolina.