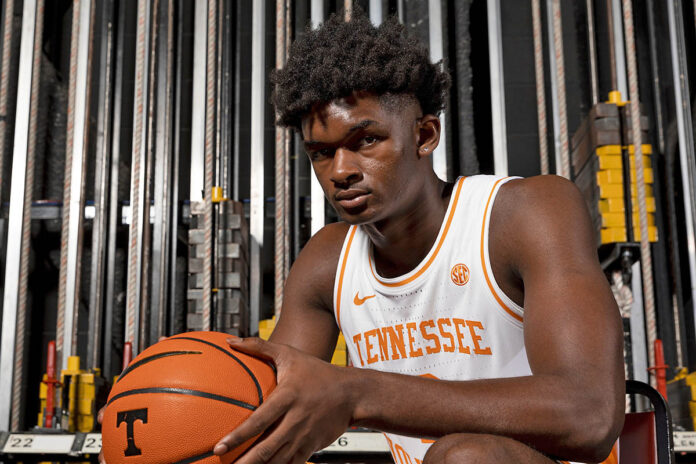 Knoxville, TN – The No. 3 seed Tennessee basketball team begins NCAA Tournament play Thursday in Indianapolis, taking on No. 14 seed Longwood as part of the South Region at 1:45pm CT inside Gainbridge Fieldhouse.

Fans can catch Thursday’s game on CBS and online or on any mobile device through the CBS Sports app. Ian Eagle (play-by-play), Jim Spanarkel (analysis), and Jamie Erdahl (reporter) will have the call.

Fans can also listen live on their local Vol Network affiliate to hear Bob Kesling and Bert Bertelkamp calling the action. A national radio broadcast is also available on channel 135 on Sirius and channel 202 SiriusXM.

On Sunday, Tennessee (26-7) claimed its first SEC Tournament championship since 1979 with a 65-50 win over Texas A&M. Santiago Vescovi led Tennessee on Sunday with 17 points on four made 3-pointers. Josiah-Jordan James contributed 16 points and 10 rebounds for his third career double-double, while Kennedy Chandler had 14 points, seven assists, and four rebounds.

For his performances in Tennessee’s wins over Mississippi State, Kentucky, and Texas A&M, Chandler was named SEC Tournament MVP, while James and Vescovi received SEC All-Tournament Honors. Chandler averaged 14.7 points and 5.0 assists per game while shooting 50 percent from 3-point range (6-for-12) and sporting a 5.0 assist/turnover ratio during the tournament.

In total, Tennessee trailed for just 68 seconds during its three SEC Tournament games en route to the conference title.

With a win Thursday, Tennessee would advance to face the winner of No. 6 seed Colorado State (25-5) and No. 11 seed Michigan (17-14) on Saturday. The time and television network for Saturday will be determined following Thursday’s games.

Founded in 1839, Longwood University is a public college located in Farmville, Virginia.

With an enrollment of 4,800, the Lancers are members of the Big South Conference.

Tennessee has never previously faced Longwood, but the Vols are 28-0 all-time vs. current members of the Big South Conference.

Rick Barnes also has never faced Longwood as a head coach, but he, too, is unbeaten against Big South teams (23-0).

Tennessee is riding a seven-game win streak and has won 12 of its last 13 contests.

The Volunteers captured their first SEC Tournament championship since 1979 last weekend in Tampa.

Tennessee stood at No. 7 in the NCAA’s selection NET ratings. Each of UT’s seven losses are Quad 1.

According to KenPom, the Vols rank third in the nation in adjusted defensive efficiency, allowing only 86.2 points per 100 possessions.

Tennessee’s scoring defense of 66.4 ppg in SEC play was the best in the league. The Vols have held 10 of their last 12 opponents to fewer than 65 points.

Tennessee has never faced Colorado State. The Vols are 12-3 all-time against current members of the Mountain West Conference.

Rick Barnes is 3-1 as a head coach against Mountain West opposition, with no meetings against the Rams.

Tennessee’s all-time series with Michigan is tied, 5-5. That includes two NCAA Tournament clashes, both won by the Wolverines (2011 and 2014). The 2014 meeting took place in the Sweet Sixteen at Indy’s Lucas Oil Stadium.

Barnes has faced Michigan only once as a head coach, as his Texas squad fell to the Wolverines in the third round of the 2014 NCAA Tournament in Milwaukee.

Barnes is 30-31 all-time against current members of the Big Ten.

Barnes is 9-6 in the second round.

Tennessee In The NCAA Tournament

This is the program’s fourth NCAA berth under seventh-year head coach Rick Barnes.

Prior to the tournament, the Vols played 14 games against 10 different teams comprising the field of 68, going 7-7 in those contests.

The average margin of victory in those seven wins was 9.1 points.

Tennessee’s first collegiate basketball appearance in the state of Indiana came on December 20th, 1958, when the fifth-ranked Vols suffered an 81-66 loss to Butler at Butler Fieldhouse (now Hinkle Fieldhouse).

In the 2014 Sweet Sixteen, UT dropped a 73-71 contest to Michigan at Indy’s Lucas Oil Stadium. The attendance of 41,072 at Lucas Oil stands as the largest crowd ever for a Tennessee basketball game. And most recently, the Vols fell to Oregon State in a first-round matchup last year at Bankers Life Fieldhouse in Indy.

Tennessee As A No. 3 Seed

Tennessee is competing as a No. 3 seed for just the second time in program history.

Tennessee went 1-1 as a No. 3 seed in 2018. The Vols defeated Wright State before falling to Loyola Chicago at the American Airlines Center in Dallas.

UT Vols In The South Region

Tennessee head coach Rick Barnes has guided four different programs to a total of 26 berths in The Big Dance. He led Providence and Clemson to three berths each before guiding Texas to 16 tournament appearances in 17 years. This is his fourth appearance with the Vols.

Barnes in 2018 became the 13th head coach ever to lead four different programs to the Division I NCAA Tournament.

Barnes has led his teams to seven Sweet Sixteens, three Elite Eights, and one Final Four, in 2003.

From 1995 through 2016, every player Barnes coached for four years made at least three trips to the NCAA Tournament.

What are the odds that Tennessee and Longwood both would feature players from Helsinki, Finland? Oddly enough, Volunteers junior Olivier Nkamhoua (injured) and Lancers sophomore Jesper Granlund both hail from Finland’s capital.

The Freshman of the Year in Longwood’s conference (Big South) is the son of first-year Tennessee assistant coach Justin Gainey. Jordan Gainey scored 16 and 13 points in USC Upstate’s two losses to Longwood this season.

For the second straight season, two Vols landed on the SEC All-Freshman Team, as Chandler and Zakai Zeigler made the eight-man squad.

Zeigler also was selected to the five-man SEC All-Defensive Team, becoming only the fourth Vol ever to earn that honor.